Manti Te’o is faster than we thought after all. But not by much.

Te’o ran an unofficial 4.71 40-yard dash at Notre Dame’s pro day on Tuesday, which proves that he is indeed faster than the underwhelming 4.82 he put up at the NFL combine last month.

Even with the quicker 40 time, Te’o isn’t expected to surge back up teams’ draft boards. The 40 time was just one piece to a terrible combine performance overall, and the Lennay Kekua hoax surely didn’t help either.

Right now, Te’o appears to be out of the first-round picture after being viewed as a potential top-10 selection just two months ago. Te’o is even doubting his chances now, which is why he reportedly won’t attend Radio City Music Hall for the first round of the draft on April 25.

While the first round is still a possibility, he seems more likely to be a second- or even third-round pick, which would mean considerably less money than he once expected. The fact that each of the five linebackers drafted in the first round over the past three years ran faster than Te’o — Rolando McClain was the slowest with a 4.69 — doesn’t bode well for the 2012 Heisman runner-up either.

So, as the AT&T kids might agree, faster is definitely better. But in Te’o’s case, it probably won’t make a huge difference. 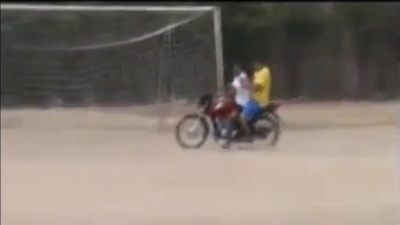 Soccer Goalkeeper Caught Out of Position, Takes Motorcycle Ride Back to Goal (Video)

Peter Chiarelli Not Reacting to Penguins’ Moves, But Says Bruins Plan on Improving