Victor Moses fired a debut goal as Liverpool returned to the top of the Barclays Premier League table following a 2-2 draw with Swansea City at the Liberty Stadium.

Jonjo Shelvey put the hosts into a second-minute lead when he converted from close range after forcing his way into space inside the box.

Swansea’s joy was short-lived, as Daniel Sturridge capitalized on a poor back pass from Shelvey to find the target and maintain his record of having scored in every game so far in 2013-14.

The Reds then went ahead nine minutes before the break, as Moses, the new signing, found the bottom corner from the edge of the area after carrying the ball from deep.

The hosts equalized midway through the second half with Michu slotting it home from Shelvey’s flick to make it 2-2.

With no further goals, the result was enough to send Liverpool back to the league summit, a point ahead of Arsenal and Tottenham.

The pregame team news confirmed starting berths for deadline-day signings Mamadou Sakho and Moses, with the former replacing Daniel Agger, who missed out due to a slight knock.

Meanwhile, Steven Gerrard captained Liverpool for the 400th time in all competitions.

The Reds went into the contest boasting the Barclays Premier League’s only 100 percent record, having won each of their first three games without conceding a goal.

However, they found themselves trailing with less than 120 seconds played as ex-Liverpool midfielder Shelvey wriggled his way through the visiting defense and curled into the back of the net at the second attempt after being initially thwarted by Martin Skrtel‘s challenge.

If falling behind a stunned Brendan Rodgers‘ men, they certainly didn’t show it as they served up an instant riposte.

Shelvey’s attempted back pass from 10 yards outside his own area only succeeded in finding Sturridge, who made no mistake with a first-time finish beyond Michel Vorm.

In doing so, he became the first Reds player to score in the first four games of a league campaign since John Aldridge in 1987.

Sturridge went close to doubling his tally for the evening after 25 minutes, as excellent play from Moses resulted in him centering for the striker, but his powerful downward header was repelled by the sprawling Vorm.

At the other end, a slick one-two between Michu and Wilfried Bony created a shooting opportunity on the edge of the area for the latter, but he could only scuff into the arms of Simon Mignolet.

Liverpool did take the lead in the 36th minute when Moses pounced on a wayward pass from Shelvey and surged towards the edge of the Swansea box before drilling low into the bottom corner to secure a debut goal.

The Swans almost repeated the Reds’ earlier trick of restoring instant parity, but Mignolet first turned a Michu drive away before Skrtel produced a brilliant goal-line challenge to deny Bony a tap-in to ensure the visitors held onto their advantage at the break.

Rodgers’ men continued to press after the re-start, and Vorm had to get down low to claw Andre Wisdom‘s effort out of the bottom corner — but they lost the services of Philippe Coutinho in the 54th minute after he failed to recover from a late Ashley Williams challenge. Iago Aspas replaced the Brazilian.

And Swansea was level soon after when Michu netted with a neat low drive after collecting Shelvey’s flick into the path of his run.

The goal lifted the spirits of the Welsh side, who pushed forward in search of a third — and with just minutes remaining, only a flying stop from Mignolet prevented Jonathan de Guzman‘s free-kick from finding the net meaning a share of the spoils for both sides. 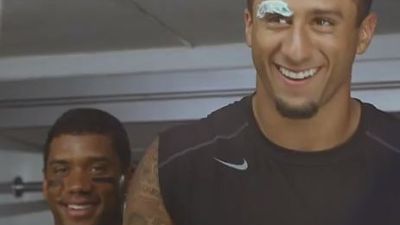