EJ Manuel was impressive on Sunday afternoon in his NFL debut against the Patriots. Unfortunately, the Patriots’ defense was just a little better than the rookie signal caller.

Manuel wasn’t helped out much by his rookie head coach, either. Apparently clock management wasn’t taught at Syracuse while Doug Marrone was on the payroll. The Patriots’ 37:43-22:17 victory in time of possession was nearly as important as anything Tom Brady, Danny Amendola or Kyle Arrington did on the field.

Plenty of people moan about Dan Dierdorf‘s style of color commentary on CBS, but the long-time analyst made some good points when it came to Marrone’s no-huddle attack. The Bills seemed more concerned with tiring out New England’s defense than they were about moving the football or letting the clock expire.

The Bills had the ball on four different series’ in the fourth quarter, yet held the ball for just four minutes and 15 seconds. The Patriots had three drives in the final quarter and held the ball twice as long.

But to completely blame Marrone for Buffalo’s loss would be a disservice to the Patriots’ defense, who were great throughout the game and even better when the game was on the line. New England gave up two touchdowns, caused two turnovers and allowed just 286 yards.

They played perfectly against Manuel, who they didn’t have much tape to glean from in the preseason. They pressured Manuel without letting him do too much damage on the ground. Due to some impressive coverage from the New England secondary, Manuel had to rely on his running backs to pick up yardage through the air, and the Patriots’ linebackers and defensive backs did a very nice job containing C.J. Spiller and Fred Jackson in open space.

Check out the Patriots’ passing charting stats below:

Logan Ryan and Jamie Collins were also in on coverage and were not targeted. From rewatching the TV tape (since coaches tape has not been released yet), Dennard played the best among Patriots defensive backs. He had a great near interception and was otherwise shadowing his receivers well down the sideline.

Dennard missed all of the preseason with an injury, but didn’t appear to be bothered in his first action of the summer. Dennard was an absolute steal in the final round of the 2012 NFL draft.

Chandler Jones generated the most pressure along the Patriots’ front seven. He had three hurries and two quarterback hits. Ninkovich and Tommy Kelly had one hurry and one hit apiece, Vince Wilfork had two hurries and Michael Buchanan, Spikes and Hightower each had one hurry. Joe Vellano did not generate pressure up the middle.

It would be easy to look at the stat sheet and see New England had zero sacks, but it’s not that simple. The Patriots rarely blitzed, so they could keep containment on Manuel. Because of that, they weren’t able to generate as much pressure with Mayo, Spikes or Hightower, but Jones gave his usual pursuit, despite doing it from a new position.

No one wondered more than myself who would be the third-down interior rusher for New England. I brought up Jones in passing, because I figured he would be considered too valuable rushing from outside. Jones took on the role and did a really nice job. Jones’ best asset as a pass rusher is his speed/strength combination. He was getting a really good push in the middle and seemed to bother Manuel multiple times.

Manuel was impressive in his rookie debut, though. He was actually much better than I expected him to perform. He rushed his throws a couple times due to pressure from New England, but held up well inside the pocket. He relied on check downs and screens to his running backs a little too much, but he also has great players for that role in Spiller and Jackson.

The Patriots’ offense had trouble moving the ball at times, so the defense may have to be this good all season to bring the team deep into the playoffs.They certainly have the pieces in place to do so.

New England’s front four has a great combination of pass-rush and run-stopping prowess. The linebackers make up for their lack of pass-coverage ability in what they bring against the run and in pass rush. The starting defensive backs are finally coming into their own after a full offseason together and played spectacularly, covering Stevie Johnson and the Buffalo receivers.

The Patriots’ secondary will face bigger challenges in 2013 (Atlanta in Week 4 comes to mind), but if New England faced this Buffalo team at this time last year, who knows what would have happened. McCourty has settled into his role as a free safety and Arrington, Talib and Dennard have shored up the edges.

When the Patriots have to go over Sunday afternoon’s tape, the offense will likely get reamed much more than the defense. In the past, the defense could never quite bail out Brady and the offense. On Sunday, they did just that numerous times. 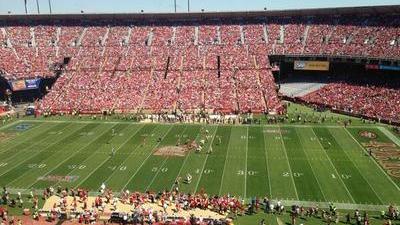