The fashion police quite literally came after Redskins cornerback DeAngelo Hall on Sunday.

While speaking with reporters after the Redskins’ 24-14 win in Oakland, Hall was accosted by an NFL uniform inspector and told that he would be fined if he did not end the interview immediately.

The corner’s crime, according to multiple reports compiled by The Washington Post’s Dan Steinberg, was wearing a black shirt with a small Lacoste logo on it.

Here’s how the altercation transpired, according to a recording obtained by Steinberg:

?Now, I don?t want to fine you. But I could,? the inspector said, according to a recording of the conversation.

?That,? the inspector said, pointing to the logo.

?For a T-shirt?? Hall asked. ?I wore this to the game! This isn?t the podium. What am I supposed to do??

?You don?t have to do the interview,? the inspector said.

?Okay, I?m not doing it,? Hall said. ?Hey, y?all write about this,? he said to the press. ?Write about him shutting down my interview.?

The abrupt end to the interview reportedly caused quite the stir in the Redskins locker room, which is not exactly surprising. Rule 5, Section 4, Article 6 of the NFL Rule Book states that “… players are prohibited from wearing, displaying, or orally promoting equipment, apparel, or other items that carry commercial names or logos/identifications of companies, unless such commercial identification has been approved in advance by the League office,” but that rule is broken on a daily basis across the league.

In fact, The Washington Times reported Tuesday afternoon — citing a league source — that the investigator in question overstepped his bounds when cutting Hall’s interview short, saying that such strict implementation of the rule “goes against the spirit of the enforcement.”

A shirt like Robert Griffin III‘s “Operation Patience” one will still get a player in trouble, but Hall can rock the crocodile all he wants. 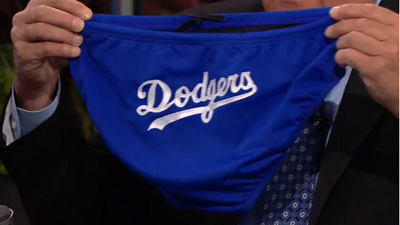