Alshon Jeffery has been a man on a mission over the last few weeks, and he continued his rampage on opposing defenses again on Sunday.

After making spectacular grabs in each of the past two games, Jeffery has built a reputation for making the surreal real. He did it again on Sunday, too, making two Browns defenders look silly as the 6-foot-3 monster outleaped both of them to bring down a 45-yard bomb from Jay Cutler.

Cutler unleashed a rainbow shot early in the fourth quarter on Sunday, giving Jeffery a shot to go up and get the ball at the goal line. Jeffery then showed off his incredible athleticism, doing more of the miraculous, which has seemingly become the norm for him at this point.

Check out Jeffery’s most recent feat in the video below. 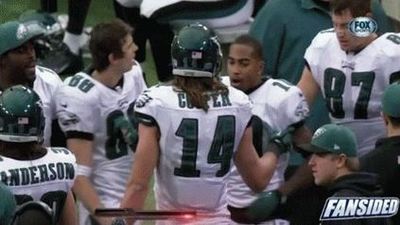 DeSean Jackson Yells at Teammates After Nick Foles Interception, Has to Be Restrained on Sideline (GIF)