BOSTON — Brandon Bass literally did not sign up for this.

The veteran power forward inked his three-year, $19 million contract in 2012 expecting perennial playoff runs alongside Rajon Rondo and whatever members of the Kevin Garnett, Paul Pierce and Ray Allen era stuck around. The Boston Celtics were coming off a stirring trip to the Eastern Conference Finals, and Bass had no reason to believe they wouldn’t get back soon.

Now, the conference finals couldn’t feel farther away. The Celtics are headed for the NBA draft lottery, and Bass, soon to be 29 years old, has seen his minutes dwindle. With another season remaining before he hits free agency, Bass sent Celtics coach Brad Stevens a text message on Tuesday to the effect that he was discouraged with his play of late.

After contributing to a 101-96 win over the Miami Heat on Wednesday, however, Bass finally had reason for a sunny outlook.

“I feel good that we actually got the win, and I was able to help us,” Bass said. “That definitely feels good. We’ve been losing, and I just don’t think I’ve been playing up to my potential.”

Bass scored 18 points, including 14 in the second half, and played physical, disciplined defense against Chris Bosh and Dwyane Wade on some of the game’s crucial plays. Besides Rajon Rondo, who finished with nine points, 15 assists and 10 rebounds after hijacking the final two minutes, Bass was the single biggest reason the Celtics were victorious — even more than Avery Bradley, who scored 23 points and hit a career-high six 3-pointers.

“He was unbelievable on Bosh and Wade at the end, and on (Ray) Allen coming off screens as well,” Stevens said. “I thought this was Bass’ best game in a while, and the shots have nothing to do with it. I just thought he was really engaged late defensively.”

The highlight of Bass’ night came in the final minute, with Boston ahead by three points. Wade drew Bass on a switch and tried to beat the 6-foot-8, 240-pound Louisiana native one-on-one. But the 10-time All-Star guard couldn’t get Bass to bite on any of his dribble or shot fakes, and he ultimately had to pass to Mario Chalmers, who missed a 3-pointer.

Part of Bass’ problem is how willingly he sacrifices for the team. Not really suited to a lead role, he’s nonetheless emerged as a leader on a young team because of his service time. Best cast as an offensive role player and situational defender, he has gone far beyond his traditional boundaries this season.

“The biggest thing about it when you’ve got a guy that’s a pro is, he’s got certain things that make him a very good player,” Stevens said. “Defensive versatility, midrange jump shooting, effort and athleticism at both ends and on the boards, those are his types of things. And sometimes, when you get outside that box, you can do other things, but you don’t maximize those things.

“I thought he really did those three things exceptionally well (Wednesday). He made tough jumpers, defended great, and his effort was at a high level, and it was one of the reasons why, at the end of the game, we were pretty active.”

Even with his infectious defensive effort rubbing off on his teammates, however, Bass wasn’t willing to divulge just what he expressed to his coach in those text messages — or what Stevens replied to turn things around. Bass isn’t satisfied with one upset victory. He signed up to win these types of games in April, May or June, not in March.

“That’s between me and Brad,” Bass said. “I’m just glad it translated into a win and me playing better.”

Rajon Rondo Takes Over; Impressions From Celtics’ Win Over Heat 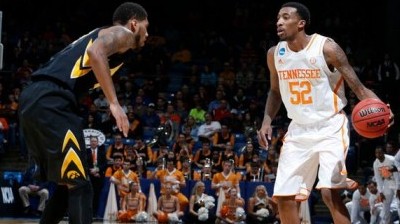 Tennessee Defeats Iowa To Reach Round 2 Of NCAA Tournament