Since bursting onto the college football scene two years ago, UCLA quarterback Brett Hundley has been a revelation for the Bruins as a productive dual-threat quarterback.

He might have to change that title to “triple threat.”

Hundley teamed up with head coach Jim Mora and teammate Luke Gane to star in a hilarious video in which Hundley acts as the “Campus Enforcer.”

Aided by Gane, his “Hype Man,” Hundley travels around campus and brings justice to students breaking school rules by chucking footballs at them. As you might expect, it’s pretty awesome.

Hundley had the chance to enter the 2014 NFL draft and likely would have been a first-round pick, but he chose to stay with the Bruins for another year.

The football team is certainly happy about his choice, but after watching that video, we doubt his fellow students are. 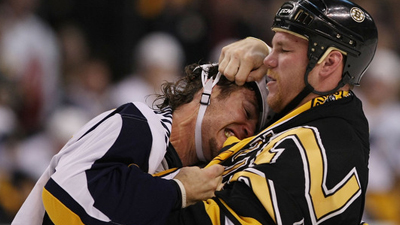 Cam Neely: Fighting Still Has Place In Hockey, But Game Is Changing