94th Minute, 2-1 Uruguay: England has a corner at the end. Goalkeeper Joe Hart has joined the attack.

90th Minute, 2-1 Uruguay:  We will have five added minutes of stoppage time.

89th Minute, 2-1 Uruguay: England is on the attack but the Uruguay defense refuses to break.

83rd Minute, 2-1 Uruguay: Luis Suarez has given Uruguay a late lead with his second goal of the game. He beat Joe Hart with a powerful shot that moved from right to left.

And again, a mistake by Liverpool teammate Steven Gerrard leads to a Suarez goal.

76th Minute, 1-1: Daniel Sturridge goes down in the penalty box between two defenders but no call is given by the referee. About 20 seconds later, Sturridge got another shot on target to earn England a corner.

The Three Lions are dominating this game right now.

74th Minute, 1-1: England has tied it and Wayne Rooney has finally scored a World Cup goal. English right back Glen Johnson made a great run into the penalty box and slid a perfect cross to Rooney, who converted the easy tap-in.

73rd Minute, Uruguay 1-0: Daniel Sturridge moves himself into a scoring position just outside the penalty box, but he was unable to get enough power behind the shot and Fernando Muslera made an easy save.

71st Minute, Uruguay 1-0: Adam Lallana is about to replace Danny Welbeck for England.

61st Minute, Uruguay 1-0: Alvaro Pereira was just kneed in the face accidentally by Raheem Sterling. He laid on the field for a few minutes, got medical attention on the sideline and returned to the action.

60th Minute, Uruguay 1-0: England’s Ross Barkley is going to replace Raheem Sterling at the next stoppage in play.

55th Minute, Uruguay 1-0: After a horrendous start to the second half, England is now on the attack.

53rd Minute, Uruguay 1-0:  Wayne Rooney is denied by Fernando Muslera from about 10 feet out from goal. A huge opportunity for Rooney to score his first career World Cup goal. He hit the crossbar in the first half.

52nd Minute, Uruguay 1-0: Edinson Cavani dribbles unopposed to the edge of the six-yard box and misses wide to the far right post as England escapes another Grade-A scoring chance by Uruguay.

48th Minute, Uruguay 1-0: Luis Suarez nearly scored on a corner kick as Joe Hart barely got back to his goal line in time to make a save. That’s the second time Hart has been out of position on a corner kick.

England is defending quite a bit to start the second half.

46th Minute, Uruguay 1-0: We’re underway in the second half. Both lineups are unchanged.

The buildup to Suarez’s goal:

40th Minute, 1-0 Uruguay: Daniel Sturridge almost beat Fernando Muslera at the near post but the Uruguay goalkeeper makes a save for an England corner.

39th Minute, 1-0 Uruguay: Luis Suarez has given Uruguay the lead! Edinson Cavani sent a perfect cross into the box and the Liverpool striker headed the ball past England goalkeeper Joe Hart. It was the first shot on target by either team so far. Suarez now has four goals in seven career World Cup games.

30th Minute, 0-0: Steven Gerrard’s free kick from 15 feet inside the corner flag is headed off the crossbar by Wayne Rooney, who’s still searching for his first ever World Cup goal.

28th Minute, 0-0: Diego Godin blocked off Daniel Sturridge and gave away a free kick. The foul should have resulted in Godin’s second yellow card of the game, but the referee showed some mercy.

Steven Gerrard’s free kick was cleared by a Godin header.

27th Minute, 0-0: Danny Welbeck dribbles all the way to the end line but a slide tackle from Diego Godin takes away the scoring chance and earns Uruguay a goal kick. Wayne Rooney was in the middle of the penalty box waiting for a pass but never got it.

25th Minute, 0-0: England is enjoying a 52-48 percent possession advantage but neither team has created an A-plus scoring chance in the last 10 minutes.

16th Minute, 0-0: Daniel Sturridge’s left-footed shot from the edge of the penalty box is blocked out of play for an England corner kick.

15th Minute, 0-0: Christian Rodriguez unleashes a shot from the top right of the penalty box and the ball sails inches over the crossbar. It was easily the best scoring chance for Uruguay so far.

9th Minute, 0-0: Uruguay captain and defender Diego Godin purposely broke up an England scoring chance with a handball outside the box. He was only given a yellow card.

4th Minute, 0-0: Luis Suarez forces Joe Hart to make a save on a corner kick. Uruguay’s threat ends with a foul outside the penalty box.

2nd Minute, 0-0: Uruguay goalkeeper Fernando Muslera misplays a ball in the penalty box and nearly gives up a scoring chance to Daniel Sturridge. Uruguay looks shaky at the back in the early minutes.

2:15 p.m. ET: England and Uruguay will play a hugely important group stage game at the 2014 World Cup on Thursday with the winner taking a giant step toward the knockout round.

The loser won’t be mathematically eliminated from contention, but it would need a ton of help from the other teams in Group B to advance to the Round of 16.

Uruguay was surprisingly upset in its first game against Costa Rica, suffering a 3-1 loss. Star striker Luis Suarez didn’t play because of an injury and the team’s attack struggled as a result. He’s back in the lineup for Thursday’s game and will be motivated to perform at a high level against several of his Liverpool teammates.

England lost 2-1 to Italy in its first group stage game.

Check back to this blog at 2:30 p.m. ET for live score updates, analysis and highlights of what promises to be an amazing game between two ultra-talented squads. 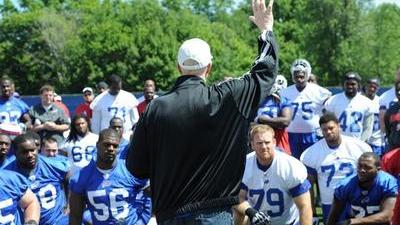