Antone Smith is entering his fifth NFL season and has just six career carries. Yet the Atlanta Falcons running back still has a hot sports take on the No. 1 overall pick in the 2014 NFL draft.

Smith was introduced to the top pick — Houston Texans defensive end Jadeveon Clowney — on Saturday night when Clowney absolutely cleaned him out with a big hit in the backfield.

Despite that big hit, Smith insists he wasn’t very impressed with the South Carolina product.

“Just a guy,” Smith said, according to CBS Houston. “I don’t see anything special. He’s just a guy. He’s a guy who plays defensive end. He plays pretty good. Made a good play.”

Those are some pretty big words from a guy who is the definition of “just a guy” himself. It’s probably safe to assume Clowney has no idea who Smith is anyway. That’s partially because Smith is a relative nobody, but also because Clowney doesn’t even know who NFL commissioner Roger Goodell is. 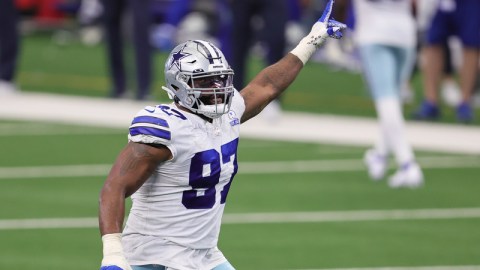