Adrian Peterson is expected to be back in the Minnesota Vikings’ lineup after only one game away from the team.

The Vikings announced Monday that they have activated the running back. Peterson was deactivated for Sunday’s loss to the New England Patriots after he was indicted on a child abuse charge for allegedly whipping his 4-year-old son with a tree branch.

“(Monday’s) decision was made after significant thought, discussion and consideration. As evidenced by our decision to deactivate Adrian from yesterday?s game, this is clearly a very important issue. On Friday, we felt it was in the best interests of the organization to step back, evaluate the situation, and not rush to judgment given the seriousness of this matter. At that time, we made the decision that we felt was best for the Vikings and all parties involved.

“To be clear, we take very seriously any matter that involves the welfare of a child. At this time, however, we believe this is a matter of due process and we should allow the legal system to proceed so we can come to the most effective conclusions and then determine the appropriate course of action. This is a difficult path to navigate, and our focus is on doing the right thing. Currently we believe we are at a juncture where the most appropriate next step is to allow the judicial process to move forward.

“We will continue to monitor the situation closely and support Adrian?s fulfillment of his legal responsibilities throughout this process.”

Peterson certainly was needed in the Vikings’ 30-7 loss to the Patriots, as Minnesota was held to just 217 total yards and 54 on the ground. Peterson rushed for 75 yards on 21 carries in the Vikings’ Week 1 blowout win over the St. Louis Rams. 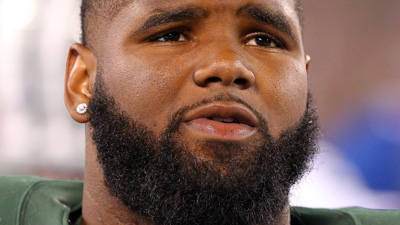