It’s big news, if only because of what Davis accomplished last season. It?s also a subject of great debate, as one could argue it points out flaws in Major League Baseball?s drug policy. But at field level — which is all that matters, right? — the Orioles? playoff hopes hardly have diminished.

Davis was suspended 25 games Friday for testing positive for amphetamines. The slugger claims the positive test was a result of using Adderall, which he had a therapeutic use exemption (TUE) for in the past but did not apply for this season. If that?s the case, ignorance is bliss. Next time, make sure you get your TUE, dude.

At first glance, it?s easy to categorize Davis? suspension, which will extend into the postseason, as a huge blow to the Orioles, who entered Friday with a 10 1/2-game lead in the American League East with 16 to play. That would be true if this was 2013, when Davis slugged 53 homers, drove in 138 runs and posted a 1.004 OPS en route to a third-place finish in American League MVP voting.

Davis has been awful this season. His power numbers — 26 homers, 72 RBIs — reflect someone who still can impact the baseball with Herculean force. But incredibly, doing so requires one to actually make contact. And that?s been a pain point for Mr. Davis in 2014.

Only four players in MLB this season have more than 130 strikeouts, an OPS lower than .725 and fewer than 90 hits: Davis, Mike Zunino, Alex Avila and Jarrod Saltalamacchia. Davis is the only non-catcher in that quartet, and there probably wouldn?t be a big stink if any of those other guys were pinched for a similar violation. They simply don?t have Davis? name recognition.

Davis has spent the majority of this season at first base, where his 0.4 WAR, according to FanGraphs, ranks 20th among 25 qualified players at the position. His 93 wRC+, which means he has created seven fewer runs than a league average player, ranks 22nd — ahead of only Eric Hosmer, Ryan Howard and Allen Craig.

The Orioles have been using Davis at third base of late with Manny Machado sidelined for the season. It?s only lessened Davis? value, as he?s been a defensive liability at the hot corner, especially when one considers the wizardry typically provided by Machado.

Now, should the idea of Kelly Johnson garnering more playing time excite the Orioles? Not by any stretch of the imagination. The guy?s already on his third team this season and doesn?t exactly scream ?game-changer.? But with Steve Pearce serving as a viable first base option and Johnson?s defense being an upgrade over Davis? glove work, Baltimore really shouldn?t skip a beat. 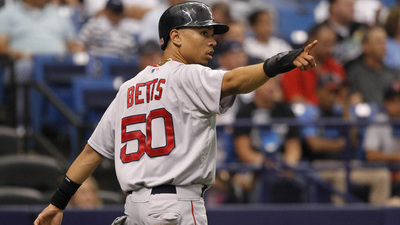