Daniel Sturridge needed just 12 minutes to remind Liverpool fans what he and they have been missing.

Sturridge returned from a five-month injury absence in emotionally spectacular fashion Saturday, scoring the second goal in Liverpool’s 2-0 win over West Ham in a Premier League game at Anfield. The goal was Sturridge’s second of 2014-15, and Liverpool is hoping there are plenty more to come from its fit-again striker.

Sturridge entered the game as a substitute in the 68th minute and hit pay-dirt 12 minutes later. Philippe Coutinho created the chance with a driving run through the center channel and a pin-point pass to Sturridge, who controlled the ball, composed himself and beat goalkeeper Adrian with a powerful finish at the near post.

Calf and thigh injuries sidelined Sturridge from September through January. Liverpool famously had problems scoring goals without its leading striker, and Sturridge called the absence the “most difficult time” in his career.

Sturridge’s goal sealed the result and lifted the spirits of Reds around the world. Sturridge is back and now can return to full game fitness at his own speed without the burden of pressing for that first goal.

Sturridge, who last played for Liverpool on Aug. 31, showed what the Reds’ revival might look like with a genuine cutting edge in the final third. It only bodes well for the Reds and their dancing hit-man. 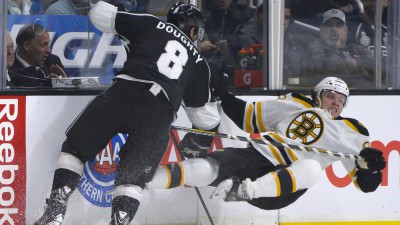 L.A. Kings Poised For Another Strong Second Half Of NHL Regular Season