ARLINGTON, Texas — Tony Romo has a stirring playoff comeback to go with all the late-season disappointments.

Romo threw two touchdown passes to Terrance Williams, the second for the lead late in the fourth quarter, and the Dallas Cowboys rallied for a 24-20 wild-card win over the Detroit Lions on Sunday in their first playoff game in five years.

The Cowboys (12-5) wiped out an early two-touchdown deficit to earn a trip to Green Bay, their first postseason visit there since a heartbreaking loss to the Packers in the Ice Bowl in 1967.

The Lions (11-6) went 99 yards for one of two first-quarter touchdowns, but Matthew Stafford couldn’t get them in the end zone again. He fell to 0-2 in the playoffs three years after losing a wild card game to the New Orleans Saints.

The winning drive came after officials reversed a pass interference penalty against Dallas, resulting in a Detroit punt.

Detroit was driving with a 20-17 lead midway through the fourth quarter when referee Pete Morelli announced a pass interference penalty against Anthony Hitchens on a third-down pass to Brandon Pettigrew. But officials reversed the call without explanation, and Sam Martin had a 10-yard punt after the Lions tried to draw Dallas offside on fourth-and-1.

Romo took the Cowboys 59 yards in 11 plays, including a 21-yard pass to Jason Witten on fourth-and-6. The winner to Williams was an 8-yarder after Romo had several seconds to throw behind an offensive line among the league’s best.

The Cowboys had to wait a little longer to celebrate after rookie DeMarcus Lawrence gave the Lions the ball back with a fumble following Anthony Spencer’s sack that knocked the ball loose from Stafford.

Lawrence redeemed himself on the clincher, sacking Stafford on fourth down and forcing another fumble near midfield in the final minute.

The Cowboys improved to 2-0 in the playoffs in their $1.2 billion stadium. The Lions have not won a playoff game since the 1991 season, when they beat Dallas. 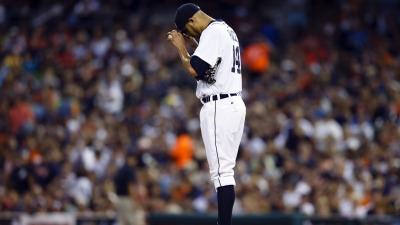 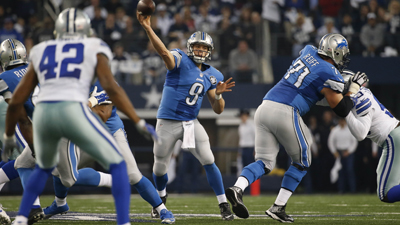