BOSTON — In a matchup of talent versus hustle Thursday night at TD Garden, talent won out.

Despite an inspired Celtics effort that stirred up memories of the franchise’s glory days, Boston simply had no answer for LeBron James and the Cleveland Cavaliers, who came away with a 103-95 win at TD Garden in Game 3 of the teams’ first-round NBA playoff series.

James scored a game-high 31 points to go along with 11 rebounds, four assists and four steals in the win, which gave Cleveland a commanding 3-0 lead in the best-of-seven series.

STRONG START FOR SULLY
Jared Sullinger enjoyed a productive first quarter for the C’s, scoring six points off the bench to go along with four rebounds, one block and two rough, hard fouls. As coach Brad Stevens hinted at pregame, the Celtics substituted liberally, using 11 players in the opening frame. That included an unexpected early appearance by Gigi Datome, who didn’t play at all in Games 1 and 2.

Stevens also decided to employ a Hack-A-Tristan Thompson strategy late in the first, sending the Cavs big man to the line six times in his first four minutes of action. Thompson, who killed Boston on the glass in Cleveland, shot 3 of 6 on those attempts.

The Cavs as a team missed six free-throw attempts in the quarter and led by just five entering the second.

A REAL THROWBACK
The second quarter was something straight out of the 1980s. Led by Jae Crowder, Jonas Jerebko and Tyler Zeller, the Celtics mauled the Cavs with physical play at both ends. Boston came away with four steals and three blocks, forced three jump balls, erased a seven-point deficit and whipped the TD Garden crowd — which was nearly half-empty at tipoff — into a frenzy.

That scappiness came to a head midway through the frame when Jerebko knocked Kyrie Irving to the parquet beneath the basket and proceeded to stare at him, inciting a minor scuffle that resulted in a technical foul for Cavs guard J.R. Smith.

An Evan Turner bucket put the Celtics up four with 2:24 left to play until halftime. But then the Cavs, as they have on so many occasions in this series, took over. Cleveland scored the final 12 points in the quarter, including nine in the final 61 seconds, to take a 56-48 lead into the locker room.

Keying that run was James, who scored the final six of those points to up his first-half total to 17.

BOMBS AWAY
Stevens stuck with Jerebko and Crowder to begin the second half, and it paid off. The Celtics opened the quarter with an 8-0 run, hitting each of their first four shots to draw back even.

The Cavs then began making it rain from beyond the arc, however, drilling five 3-pointers to storm ahead once more. They led by as many as 12 in the quarter and took an 84-76 advantage into the fourth.

But even as Cleveland built its lead to nine with five minutes to play in the fourth, Boston refused to die. Crowder scored five consecutive points, and Turner buried a 3-pointer to pull the C’s to within three.

Kevin Love nailed two triples of his own in the final 2:13, however, both coming off huge offensive rebounds by Thompson, to seal the win for Cleveland.

INVISIBLE ISAIAH
Isaiah Thomas, the Celtics’ leading scorer in Games 1 and 2, was nowhere to be found Thursday. The point guard finished with a mere five points in his 21 minutes of action, shooting 2 of 9 from the floor, attempting just two free throws and posting a team-worst minus-13 rating.

UP NEXT
Sunday is judgment day for the Boston Celtics. A win in Game 4 will send the series back to Cleveland. A loss will end the Celtics’ season. 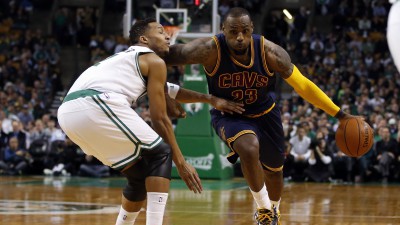