Report: Nate Solder Out For Rest Of Patriots' Season With Torn Biceps - NESN.com Skip to content

The New England Patriots reportedly lost their starting left tackle for the 2015 season.

Nate Solder tore his right biceps, a league source told The Boston Globe’s Jim McBride. Solder is out for the year, according to McBride.

Solder suffered the injury during the second quarter of Sunday’s game, when he gave up a sack to Dallas Cowboys defensive lineman Tyrone Crawford. The ailment originally was listed as an elbow injury.

Marcus Cannon filled in for Solder at left tackle in the second half. Cannon had rotated in to both offensive tackle spots through the first three weeks of the season. The Patriots also could move Sebastian Vollmer to left tackle and have Cannon play on the right side.

The Patriots now have just two offensive tackles on their roster, so they’ll likely have to sign another player before Sunday night’s visit to the Indianapolis Colts. The Patriots have Cameron Fleming and Blaine Clausell on their practice squad, so they’re the top candidates to join the 53-man roster. Tight end Michael Williams began his career as a tackle with the Detroit Lions and presumably could move back there now that Solder is out.

Losing Solder could be a big blow to the Patriots’ offense, but quarterback Tom Brady has been highly successful at releasing the ball quickly, so it hasn’t mattered who has been blocking for him through the first four games of the season. If teams begin to game plan around Brady’s quick trigger, however, the quarterback’s blind side could become a problem. Williams mostly has been used as a blocker early in the season, so he could continue to help the Patriots’ new left tackle in protecting Brady.

The Patriots signed Solder to a two-year, $20 million contract extension before the 2015 season. He’s locked up through 2017. 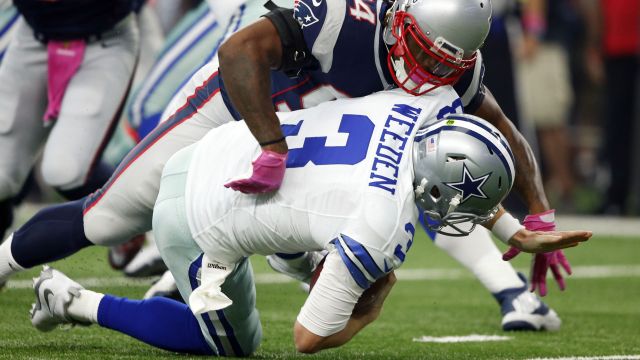 Matt Cassel Will Be Cowboys’ Starting QB; Brandon Weeden Back To Bench