BOSTON — The Bruins’ lineup featured three new faces Tuesday night, but a goal by their longest-tenured player proved to be the difference against the Calgary Flames.

Patrice Bergeron scored a power-play goal late in the third period, and Tuukka Rask stopped 24 of the 25 shots he faced as the Bruins won 2-1 at TD Garden in their first game following Monday’s NHL trade deadline.

IT WAS OVER WHEN…
Calgary was called for too many men on the ice with 4:06 remaining in the third period, and Bergeron potted the game-winner on the ensuing man advantage.

Patrice Bergeron puts the Bruins up 2-1 on the power play pic.twitter.com/7ufFTwRCio

The goal, which Ryan Spooner and David Krejci assisted on, came after Boston failed to find the back of the net on its first four power-play opportunities. It also brought Bergeron into a tie with Don Marcotte for 10th on the Bruins’ all-time goals list.

Liles skated with Adam McQuaid on Boston’s third pairing, and Stempniak lined up alongside Brad Marchand and Bergeron on the team’s top line. Acciari, meanwhile, joined Landon Ferraro and usual first-liner Brett Connolly on a new-look fourth line that featured much more skill than its previous iterations.

All three also killed penalties, and Liles saw some power-play time, as well.

FOURTH THINGS FIRST
It did not take long for the Ferraro-Acciari-Connolly trio to make an impact, as all three were on the ice for the game’s first goal. Ferraro received a slick pass from defenseman Torey Krug midway through the first period and fired it past Flames goalie Joni Ortio, with Connolly getting credit for the secondary assist.

Ferraro has enjoyed an offensive resurgence of late. After going without a point from Dec. 18 to Feb. 22 — a span that included one game missed to injury and three healthy scratches — he’s now recorded three over his last four games.

GETTING DEFENSIVE
Scoring chances were hard to come by in the early going. Marchand was the only player on either team to record more than one shot on goal in the first period, and the Bruins didn’t tally their 10th shot on net until less than three minutes remained in the second.

While Boston’s offense sputtered, Rask came through with a number of critical saves, highlighted by his point-blank denial of a Sean Monahan bid.

Huge save from Tuukka Rask to keep it a 1-0 game! #NHLBruins pic.twitter.com/Bgz7iL2lmQ

The Bruins’ 1-0 lead held until the 5:35 mark of the third period, at which point Jakub Nakladal fired a shot past Rask to get Calgary on the board.

Nakladal’s goal was the lone blemish on an otherwise excellent night for the Bruins goaltender.

(UN)WELCOME BACK, DOUGIE
The Garden crowd roundly booed Dougie Hamilton throughout the night in the former Bruins defenseman’s first game back in Boston. Hamilton, who was dealt to Calgary last summer, finished with two shots on goal in 19:11 of ice time.

UP NEXT
Patrick Kane, Jonathan Toews and the defending champion Chicago Blackhawks come to town Thursday night. The Blackhawks, who were very busy in the days leading up to the deadline, are the only team the Bruins have yet to face this season. 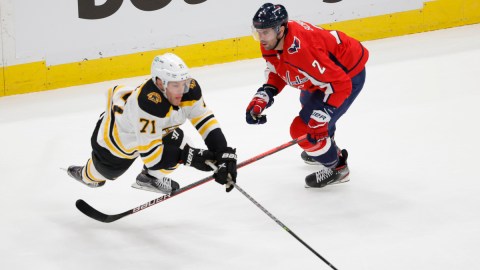