BOSTON — Without the services of Kyrie Irving and Gordon Hayward — the Celtics’ two-best players — the team’s third option, Al Horford, carried Boston to a 112-96 victory in Game 7 of their first-round NBA playoff series against the Milwaukee Bucks.

The Bucks began the third quarter strong, cutting the Celtics lead to 62-59 at one point, but Horford steered Boston back to a double-digit lead. He scored 10 points in the third quarter and finished with a team-high 26 (tied with Terry Rozier), along with eight rebounds, three assists and a block.

Not only was Horford productive offensively when the C’s needed it most, he did so in an efficient manner, shooting 13-for-17 from the floor in 33 minutes.

“All year Al makes the right play, does the right thing, and that’s what a five-, six-tie All-Star is supposed to do,” Celtics forward Jaylen Brown said. “He continues to play the game the right way and when times get tough, we lean on him a little bit, and in Game 7, biggest game of the year, he showed up.”

Horford averaged 18.1 points on 58.7 percent shooting, along with 8.7 rebounds through seven games this series. He was Boston’s most consistent player against the Bucks and stepped up when his team absolutely needed it — 22 points and 26 points in pivotal Game 5 and Game 7 wins, respectively.

Here are some others notes from Celtics vs. Bucks Game 7:

— Aron Baynes was a good contributor offensively in the series, and he scored eight first-half points. In fact, his six points on 3-for-3 shooting bested Giannis Antetokounmpo’s four points on 1-for-5 shooting in the first quarter. Baynes finished with eight points, seven rebounds and two assists in 15 minutes of action off the bench.

— Semi Ojeleye got his third start of the series and for the second time, he made life difficult for the Greek Freak. Ojeleye helped keep Antetokounmpo to less than 50 percent shooting (7-for-17) and a mediocre (by his standards) 22 points. The C’s rookie forward made it tough for Antetokounmpo by matching his physicality in the low post, putting a hand in his face when contesting shots and beating him to the middle of the paint on drives to the basket, which forced the Bucks star to kick it out to the perimeter.

“To be honest, I expect nothing less of Semi — his mindset and how he carries himself,” Brown said. “He was ready for that challenge.”

“They’re a very well-coached team,” Bucks forward Malcolm Brogdon said. “They go on runs. They’re very disciplined, so they get good shots. We let them have a lot of open threes (Saturday night), and they’re good. They shot the 3-ball well. They got to their strengths.”

Via @EliasSports, Jayson Tatum is the second Celtics rookie in franchise history to score 20 or more points in a Game 7

— Coaching was a huge factor in this series. Brad Stevens made a lot of good adjustments, notably putting Ojeleye on Antetokounmpo and sticking with pesky backup point guard Shane Larkin despite some sloppy mistakes with the ball early in the series.

Bucks coach Joe Prunty, meanwhile, struggled to find good lineups, especially in Boston. For example, he played a 40-year-old Jason Terry and inconsistent forward Shabazz Muhammad for most of the third quarter Saturday night. The C’s, as a result, outscored the Bucks by six in the quarter to take an 81-67 lead entering the fourth.

And then there was this decision by Prunty with the Bucks down 15 with 6:16 left to play.

Fitting for Joe Prunty's coaching performance tonight that he called a timeout there with Tatum out of the play. Bucks could have had a 5-on-4.

— The Celtics have enjoyed plenty of success in Game 7s at home. 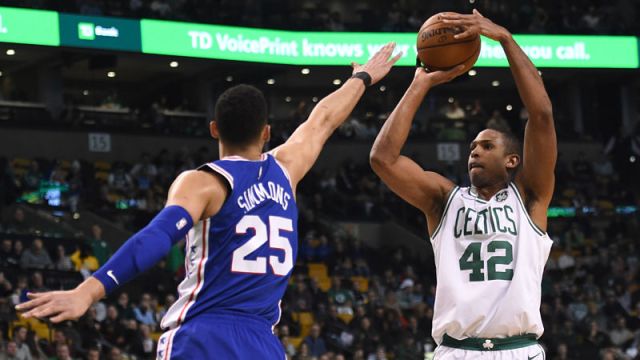 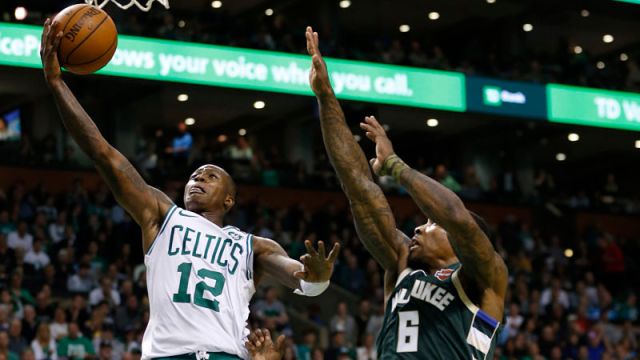 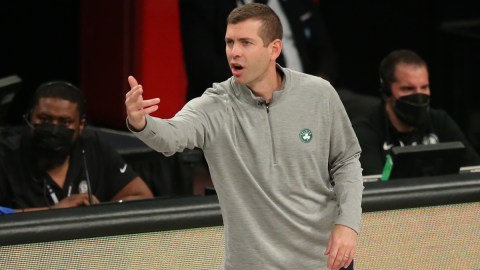