Are things going to come to a head in Foxboro?

It was reported over the weekend that both Tom Brady and Rob Gronkowski would not be in attendance at the beginning of the New England Patriots’ offseason workouts, and that Brady likely will miss the majority of the program as he focuses on spending time with his family and his body coach, Alex Guerrero.

But is it something more than that?

NBC Sports Boston’s Tom E. Curran wrote in a column Monday that the current discontent within the Patriots organization stems from Brady, who Curran writes is leading the “pushback” against head coach Bill Belichick.

Curran gives a few examples of former Patriots acting out against Belichick before writing that this is different because Brady is the one at the at the center of the battle.

“The pushback now is being led by Brady,” Curran writes. “And it?s not about one thing, it?s about everything. It?s about the culture. A culture we?ve all celebrated for nearly two decades as being the reason the Patriots from 2001 through 2019 will be the standard by which all American sports dynasties are measured.

“But when the player whose buy-in is most important ? Brady ? begins an open revolt, then what? What changed? Who changed? How many teammates agree with him? What next?”

While Curran didn’t cite evidence of the “open revolt,” he went on Mike Florio’s “PFTPM” podcast to discuss his column, noting that things have changed over time as Brady has gone from a “learning player” to the most important voice in the locker room.

“But over the course of time, you know, taking less money, seeing players who he valued very much jettisoned or nickel and dimed or went out the door, along with the team’s success, I think started to wear on him, as did Belichick’s very present inclination toward negativity,” Curran told Florio. “And as the 2010s have worn on, I think Brady has become more and more spiritual, positive, his wife has exercised a lot of influence on him, so has Alex Guerrero who he’s very close with, in the importance of positivity, and the importance of lifestyle and life choices.

“And a lot of those are at complete loggerheads with what Belichick needs to run the team. He goes to the whip, Belichick does, and Brady doesn’t go to the whip.”

When asked what might have been the last straw, Curran points to a specific moment.

“I think it was the drafting of Jimmy Garoppolo,” Curran said. “I really think so. When that happened and Bill Belichick, on the night of the draft said, ‘we all understand Tom’s age and contract situation.’ That was ringing the alarm that Tom is on borrowed time, this is his successor. And what that did was, it lit an immense fire under Brady who was already a tremendous player and said, ‘you know what? F that. It’s not going to happen, it’s not going to happen on my watch. What happened to Drew Bledsoe because he fell asleep at the switch and had a family and went through a bunch of offensive coordinators and got a litle bit lax about the job, that’s not going to happen with me. Over my dead, friggin’ body.'”

Curran and Florio go on to discuss multiple aspects of the situation, including the idea that Brady could retire before the 2018 season begins as a way to stick it to Belichick one final time or trying to outlast his head coach.

It appears that the drama at Gilette Stadium might not be ending anytime soon. 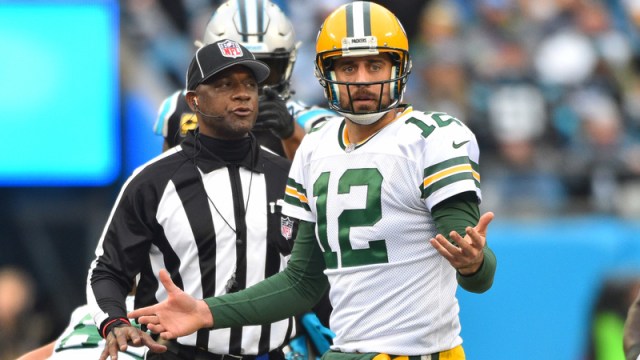