If you look up the definition of “do or die,” you’ll probably find a description of the decision Andrew Benintendi made Wednesday night at Minute Maid Park.

The defending World Series champion Houston Astros were one out away from going down three games to one to the Boston Red Sox in the American League Championship Series.

But they were far from dead.

Trailing 8-6 with two outs in the ninth inning, the Astros loaded the bases against Sox closer Craig Kimbrel and sent their best hitter, Alex Bregman, to the dish with a chance to tie the game or win it for Houston. The young third baseman, who once was drafted by the Red Sox, cranked a sinking line drive to left field that looked like it would drop to tie the game.

Benintendi sprinted in and elected to lay out to try and make a game-saving catch, knowing that if the ball got by him, the Astros would walk off and tie the series at two games apiece. The 24-year-old went full extension and gloved the liner just before it hit the grass, silencing the home crowd and putting the Red Sox one win away from the World Series.

The Red Sox outfielder knew off the bat that he was going to put it all on the line.

“I thought I got a good jump on it,” Benintendi said after the game, as seen on NESN’s postgame coverage. “It wasn’t hit that hard and I think it got in a little bit so, I don’t know, I thought I could catch it and timed it up well. I mean, at that point it’s do-or-die, so glad I caught it.”

The 24-year-old star was confident he could make that catch and wouldn’t end up trapping the ball.

“That’s why I dove. I wouldn’t have dove if there was any chance that it would have bounced, but it was close. I haven’t seen a replay or anything but I felt like I got a good jump on it.”

Benintendi’s miraculous catch saved the Red Sox from facing Justin Verlander with the series tied Thursday, and now, the Red Sox can push the reigning World Series champions off the cliff in Game 5.

— The Red Sox have scored seven, eight and eight runs in the past three games, respectively. It’s the first time all season the Astros have surrendered six or more runs in three straight games.

— Jackie Bradley Jr. crushed a two-run home run during the sixth inning. He now has nine RBIs in four ALCS games, which is the third most ever by a Red Sox player in the LCS. David Ortiz (11 in 2004) and Manny Ramirez (10 in 2007) are the other two.

— Manager Alex Cora announced after the game that David Price will start for Boston in Game 5. The left-hander will be going on three days rest with Chris Sale still feeling the effects of the stomach illness that had him hospitalized Sunday.

— Kimbrel now has given up five runs on six hits with five walks in 5 1/3 innings during the playoffs — and somehow recorded four saves.

— Astros designated hitter Jose Altuve had a two-run home run taken off the board in the first inning when crew chief Joe West ruled that a fan interfered with Mookie Betts’ ability to make a home-run robbing catch. After review, it was determined there was not enough evidence to overturn the call. 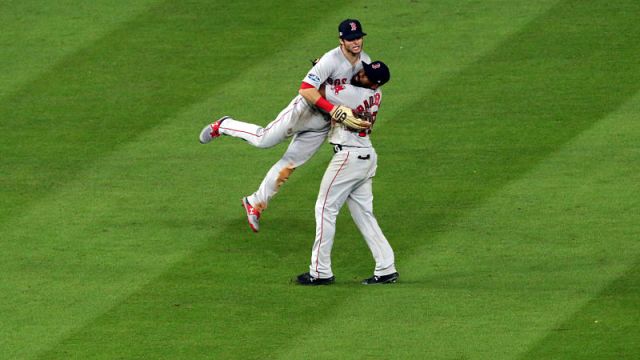 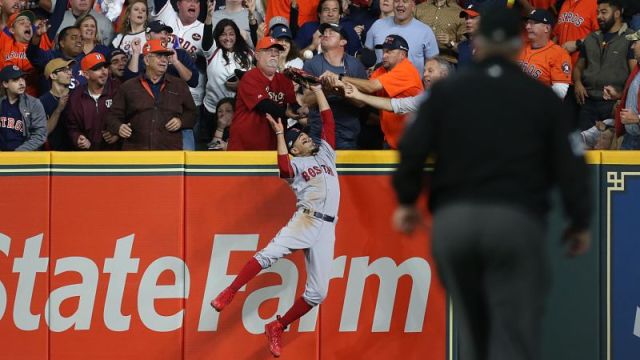