BOSTON — It sure looked like Gordon Hayward was itching to take the floor Wednesday night.

Hayward posted one of his worst games of the season Monday night, going scoreless on 0-for-6 shooting in the Boston Celtics’ loss to the San Antonio Spurs. Two nights later, however, Hayward turned in arguably his best game of the campaign with an encouraging bounce-back performance.

The Celtics, who were without Kyrie Irving on Wednesday, were lifted to a 115-102 win over the Minnesota Timberwolves on the back of Hayward’s season-high 35 points. Hayward was deadly from the field, compiling an absurd 14-of-18 mark from the field, including 4-of-7 from 3-point range.

Hayward showed no signs of hesitancy or timidness against the T-Wolves, which hasn’t always been the case this season. The veteran forward knows the type of mindset Boston needs him to have on a nightly basis, so his latest outing certainly serves as a promising step forward.

“Just to try to stay aggressive, be aggressive,” Hayward said. “Whether it’s for my shot or for others I think the team needs me to be aggressive. Try to make plays for others, get in the seams. I need to try to attack the basket more, get to the line a little bit more. I still need to do a better job of that. Anytime you have a game like I did last game you just want to be ultra-aggressive.”

Hayward didn’t solely rely on jumpers against Minnesota either, as his monster night featured several takes to the basket and confident dunks. His explosiveness still isn’t at the level he’d like it to be, but he knew the process of returning to his old form would take some time.

“I think it’s slowly getting there,” Hayward said. “I think my lateral movement is definitely so much better than the beginning of the season. But I think that’s pretty close to where it was. I think vertically I still have a little ways to go. My ankle’s a little sore right now, but I think in April and May it will be better than it is right now. Still doing stuff for my ankle every day trying to get it better. It’s the nature of the injury. It’s getting better.”

Here are some other notes from Wednesday’s Celtics-Timberwolves game:

— Boston’s win didn’t come without injury concerns. Marcus Smart briefly left the game in the third quarter with an apparent shoulder injury, while Marcus Morris was sidelined for the back end of the fourth quarter with a neck ailment.

— Terry Rozier got the start at point guard in Irving’s absence. The fourth-year pro finished the night with 16 points to go along with five assists and three rebounds.

— Hayward evidently loves to play against the Timberwolves. His previous season-high (30) came in Minnesota on Dec. 1.

— Brad Stevens prompted some tweaking to the Celtics record books with his latest victory.

With his 243rd career win tonight against Minnesota, Brad Stevens has surpassed Bill Fitch (242) for the fifth-most wins by a Celtics head coach in franchise history

— The Celtics as a team shot 59.2 percent from the field. 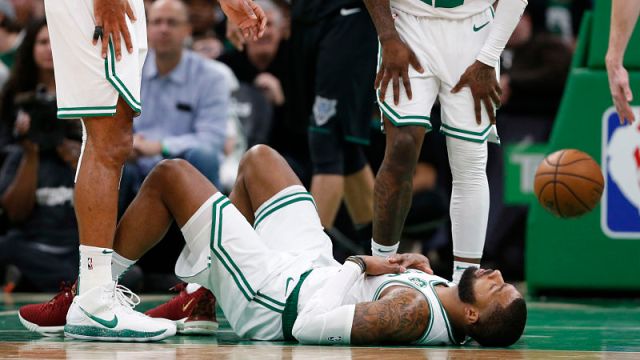