Nobody really knows what to expect from Cam Newton in 2020.

The quarterback, who reportedly agreed to a one-year contract with the New England Patriots on Sunday, has been hampered by injuries the last few seasons, seriously impacting his on-field performance. But now, he supposedly is healthy and will get a shot to win the Pats’ starting quarterback job.

A healthy Newton might not even be New England’s starting signal-caller, as one division rival head coach envisions the Patriots using the 2015 MVP in a unique role because they love Jarrett Stidham so much.

However, former NFL general manager and Patriots exec Mike Lombardi explained this week on his “The GM Shuffle” podcast that if Newton is healthy, he’ll win Comeback Player of the Year in 2020.

“You talk about 2015, great, that was the MVP season, but if you really study 2018 and examining those eight games … he was sensational,” Lombardi said, via Radio.com. “In ’18, he threw 15 touchdown passes and four interceptions before the shoulder injury… he was electrifying. He was only sacked 12 times in those eight games which was really low for the Carolina Panthers with their offensive line.

Judging by Newton’s blunt comment upon joining the Patriots, it sounds like he’s looking to embark on a revenge tour of sorts in 2020. Should he be successful in that venture, then a Comeback Player of the Year honor most certainly is not far-fetched. 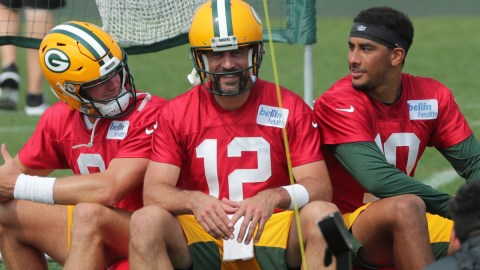