The Boston Red Sox have played the New York Mets each of the last three nights, but they hadn’t really faced the team from Wednesday night.

It’s because the Red Sox hadn’t seen two-time National League Cy Young winner, Jacob deGrom, who was on the mound at Citi Field for the first game of the two-game series in New York.

And that’s why Red Sox players are of the belief that their 6-5 win, which also snapped a four-game losing streak, means all that much more.

“Yeah, especially going up a guy like deGrom. You know, coming out on top of this one it’s a big one for us,” Red Sox pitcher Nathan Eovaldi told reporters after the win. “Hopefully it’s going to get the ball rolling. You know, we had a lot of guys step up and do the things we needed them to do. We had bullpen guys come in, slam the door, being able to keep up with deGrom and come up big against their bullpen.

“Again, this is a huge win for us,” Eovaldi continued. “We definitely haven’t started out the way we wanted to on kind of all cylinders. We’ve been hitting the ball good, but we got to pitch better and I feel like we threw the ball a lot better tonight. And again, you know, having a big win against deGrom, it’s a big deal for us. We were able to rally together.”

Manager Ron Roenicke said he thought the Red Sox did a “great job battling” deGrom and lauded their approach at the plate. Christian Vazquez, who was the leader offensively with two hits and three RBIs, agreed.

“Winning is better than losing so I think, we got the lead with a tough pitcher on the mound, deGrom, you know, back-to-back Cy Young, he’s got great stuff,” Vazquez said. “… So I think the bats (were) good today and we got good swings tonight.”

The Red Sox touched deGrom for two runs on three hits in the first six innings. They did more damage with a three-run eighth inning.

More Red Sox: Offense Comes Back To Life As Boston Gets Back In Win Column

Here are some other notes from Wednesday’s Red Sox-Mets game:

— Vazquez recorded his third multi-hit game of the season Wednesday, though perhaps none were more important that that in the eighth inning.

The veteran catcher blasted a seventh-inning solo homer to tie the game 3-all and then smacked a two-RBI single in the eighth to extend Boston’s lead to 6-3 with two innings to play.

“In the homer, I saw that curveball very good. I saw it and I know he like to spin the ball. But with (Justin) Wilson, I’ve faced a couple times before and I know he like to throw that cutter in and I think I got a good swing — late, late swing — and I got the base hit with two RBIs. So, that feels good.”

— Brandon Workman made himself work for his first save of the season.

The Red Sox reliever filled the bases with nobody out after allowing a pair of walks and one hit. He did, however, bounce back with a pair of strikeouts before earning the last out of the game and stranding three runners on base.

Workman finished with a stat line of two hits and one earned run, throwing 30 pitches (16 strikes).

“Made some good pitches when he needed to, and I thought some of their guys had a couple good at bats to get on base,” Roenicke said of Workman. “But yes, command. So, command on his fast ball, command on his curve ball. He didn’t do either one of those until the end when he had to make pitches and then he made some really good pitches.”

— Nathan Eovaldi had another good start.

The hard-throwing right-hander went five full innings scattering eight hits with two earned runs. Eovaldi recorded four strikeouts while 57 of his 89 pitches were strikes. It comes as Eovaldi’s second game of the season, having allowed just one run on five hits in six innings against the Baltimore Orioles last week.

“I felt alright. For the most part I needed to change it up earlier, I knew they were going to be aggressive,” Eovaldi said. “I felt like I was locating some pitches and they were just going with it. I felt like I needed to mix in the curve ball a little quicker, make some adjustments. … Again, anytime you’re going up against a pitcher like deGrom, you got to not make those mistakes.”

— Did Mitch Moreland kind of show off the wheels Wednesday?

Moreland, who recorded the 200th double of his career in the fourth inning, scored a run later in the frame after going to third base and crossing home plate on a pair of wild pitches. Moreland also beat out a slow dribbler to third base in the eighth inning, scoring Kevin Pillar in the process as the Red Sox took a 4-3 lead.

The Red Sox (2-4) will return to action back at Citi Field on Thursday. 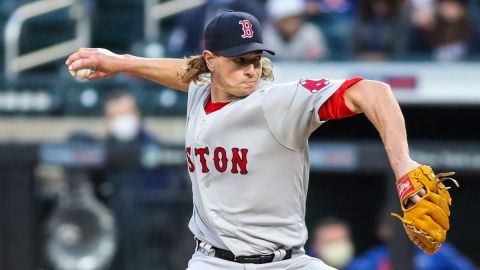