We’re still unsure if there will be a 2020 NFL season, but training camps are underway and teams are preparing to go through with the year.

The same should be true for fantasy football teams now that the deadline to opt out of the NFL season has passed.

Entering a fantasy football draft, tight end certainly is one of the most difficult positions to draft. The talent is top-heavy, but fantasy owners tend to be hesitant to use a high draft pick for an elite tight end. And it’s hard to balance selecting one too soon with the gamble that is holding off on filling that space in the later rounds.

So, whether your league is PPR format or not, here are 20 of this year’s top tight ends.

1. Travis Kelce, Kansas City Chiefs (Bye Week: 10)
Kelce just agreed to a four-year, $57.25 million contract extension with Kansas City, and if you watched him at all during the Chiefs’ Super Bowl run, you know why. He led all tight ends in receptions and receiving yards in 2019. And with quarterback Patrick Mahomes locked up long term, as well, expect more greatness from the duo in 2020.

2. George Kittle, San Francisco 49ers (Bye Week: 11)
Kittle played through injuries for much of last year, but he was an enormous part of the 49ers making it to the Super Bowl and still put together a spectacular season. If he returns healthy in 2020, with the confidence of a new contract that made him the highest-paid tight end in the NFL, expect the 26-year-old’s ceiling to be even higher.

3. Mark Andrews, Baltimore Ravens (Bye Week: 8)
Andrews made his fantasy owners very happy last season, finishing in the top five at his position in points. When he’s on the field, he’s incredibly efficient, typically racking up big receptions, often for more than 20 yards. With Hayden Hurst traded from Baltimore, you also can expect Andrews’ targets to increase.

4. Zach Ertz, Philadelphia Eagles (Bye Week: 9)
Ertz racked up the fourth-most fantasy points among tight ends last season, but with the rise of teammate Dallas Goedert and an increase in wideout options thanks to guys getting healthy and the NFL draft, the Eagles have a deeper receiving corps to work with entering 2020. Still, Ertz remains in the top tier of tight ends.

5. Darren Waller, Las Vegas Raiders (Bye Week: 6)
Waller had a breakout 2019 as the Raiders’ No. 1 option, but he will have more competition for targets this season. That said, he was the only tight end in the NFL to finish every game of last season with at least 7 PPR points. You can’t put a price on consistency.

6. Evan Engram, New York Giants (Bye Week: 11)
Full discretion: Health is a big question here, as injuries have caused Engram to miss quite a few games over the last two years. But when healthy, Engram’s flashes of brilliance are the reason he averages 8.5 targets per game.

7. Tyler Higbee, Los Angeles Rams (Bye Week: 9)
Higbee is a totally respectable option for owners not wanting to use a high draft pick on a tight end. Injuries in the Rams’ offense led to a lot more targets as the 2019 season went on, and that growth throughout the year could translate to more success in 2020.

8. Hunter Henry, Los Angeles Chargers (Bye Week: 10)
It’s to be determined who will be throwing to Henry at the quarterback position. But in Weeks 6 through 11 last season, he averaged over 16 fantasy points per game and sneakily was one of the NFL’s most efficient tight ends, ranking in the top 10 for receptions and receiving yards. There’s a lot of upside here, provided Henry stays healthy.

9. Rob Gronkowski, Tampa Bay Buccaneers (Bye Week: 13)
Let’s not forget that before Gronkowski’s “retirement,” he made a name for himself as the greatest tight end of all time. Yes, there will be a lot of competition for targets in Tampa Bay. But in a strange offseason where Tom Brady hasn’t had as much time as he’d probably like to get acquainted with his new receivers or the Bucs’ playbook, the chemistry between the quarterback and Gronkowski already is well established.

10. Austin Hooper, Cleveland Browns (Bye Week: 9)
Hooper no longer can be considered a sleeper, finishing as the third-best tight end in PPR fantasy points per game last season. Now that he’s in Cleveland — a similar situation to what he had in Atlanta in terms of target competition but with a downgrade at quarterback — we’ll see how it affects his production.

11. Noah Fant, Denver Broncos (Bye Week: 8)
Fant emerged in his first season, leading all rookie tight ends in targets, receptions and receiving yards. Not to mention, he’s a machine at racking up yards after the catch. With the options the Broncos have in their receiving corps, Fant is more likely to have huge games here and there as opposed to consistent targets. Still, a breakout sophomore season could be on the horizon.

12. Jared Cook, New Orleans Saints (Bye Week: 6)
Perhaps the production he enjoyed the last two seasons isn’t sustainable, especially with New Orleans adding Emmanuel Sanders to its receiving mix. But Cook finished among the top 10 tight ends despite having less than 10 average targets per game. Expect him to at least contribute in the red zone.

13. Mike Gesicki, Miami Dolphins (Bye Week: 11)
Gesicki had 89 targets last season, seventh-most at the position, despite a slow start. He had five touchdowns in his last six games. There’s some uncertainty entering 2020, though, mostly because of questions about his usage with a new offensive coordinator taking the reins in Miami.

14. Hayden Hurst, Atlanta Falcons (Bye Week: 10)
Hurst could be an absolute steal in fantasy drafts, as he’s entering a situation with much more opportunity than he had in Baltimore playing behind Mark Andrews. You can bet Hurst has quite the chip on his shoulder, too, and could make for a great third option for quarterback Matt Ryan behind Julio Jones and Calvin Ridley.

15. Dallas Goedert, Philadelphia Eagles (Bye Week: 9)
He might have gotten more opportunities thanks to all of the injuries Philadelphia suffered last season, but Goedert certainly proved he can be trusted to step up and make plays, totaling at least five targets in 10 of the last 11 games. He plays behind Zach Ertz, but he seemed to close the gap between him and his teammate with each game last year. Not to mention, he’s younger and much cheaper.

16. Jack Doyle, Indianapolis Colts (Bye Week: 7)
If his three-year extension is an indicator, the Colts value Doyle pretty highly, and his ceiling stands to raise with the addition of Philip Rivers at quarterback. With Eric Ebron out of Indianapolis, Doyle could make for a solid sleeper pick.

17. Jonnu Smith, Tennessee Titans (Bye Week: 7)
For the first time in his career, Smith will be the top tight end on Tennessee’s depth chart. Despite having only 44 targets last season — a total that surely will increase with Delanie Walker out of the picture — he was one of the most efficient players in the NFL, showing he takes advantage of every opportunity he gets.

18. Chris Herndon IV, New York Jets (Bye Week: 11)
Between injuries and a four-game suspension, Herndon recorded just two targets in his one appearance for the Jets. But if 2018 is any indication, Herndon is poised for the breakout season he should have had last year.

19. T.J. Hockenson, Detroit Lions (Bye Week: 5)
An injury-riddled rookie season overshadowed all of the potential shown in Hockenson’s first game. He drew comparisons to Rob Gronkowski coming out of college and remains the Lions’ No. 1 option at the position. If he and Matthew Stafford both are healthy, a lot could happen for Detroit’s offense.

20. Blake Jarwin, Dallas Cowboys (Bye Week: 10)
Jarwin got the short end of the stick when Jason Witten decided to come out of retirement and hog a majority of Dallas’ tight end targets. But the balls that were thrown Jarwin’s way showed his reliability, as he caught 31 passes on 41 targets for 365 yards with three touchdowns last season. With Witten now out of the way, the Cowboys will lean heavily on Jarwin, who just signed a three-year contract extension. 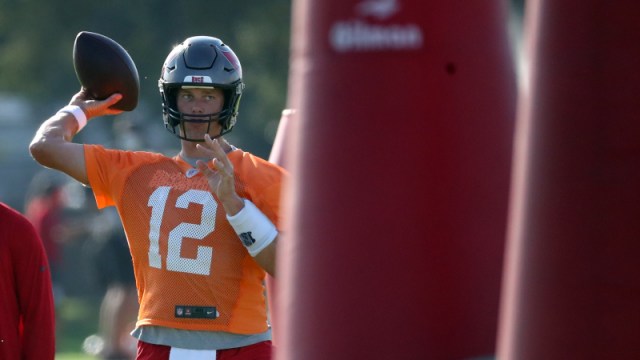 Fantasy Football 2020: 10 Potential Busts You Should Avoid In Your Draft 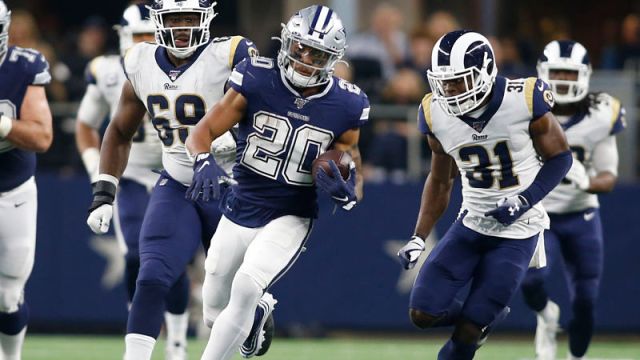 Fantasy Football 2020: Top 10 Running Back Handcuffs To Target In Drafts