In fact, Stevens thinks Hayward could make his return during the Eastern Conference finals.

?Since I?ve seen him last, it?s good progress,” the coach told reporters, per MassLive.com. “I know he feels better. He?s worked hard to get to where he is and I think he?ll play at some point in this series. As far as predicting a timeline, I have no idea. But I feel like he?s made good progress and will play eventually.?

Hayward exited Game 1 of the C’s first-round series against the Philadelphia 76ers on Aug. 17 after rolling his right ankle while battling in the paint late in the fourth quarter. He’s missed all 10 of the Celtics’ games since, but has been “aggressively treating” the injury in the interim.

Hayward took a big step forward with his rehabilitation, attending his first practice in roughly a month.

?He did a couple of non-contact, very light drills,” Stevens said. “He?s out there doing individual work right now, but none of the stuff with any groups.?

This certainly is promising news for both Hayward and the Celtics. Despite winning the last two series without him, Boston could use his presence on the court if it want to succeed in their quest for its first championship since 2008. And surely, he is itching to get back on the court.

The Eastern Conference finals, by the way, begin Tuesday at 6:30 p.m. ET. 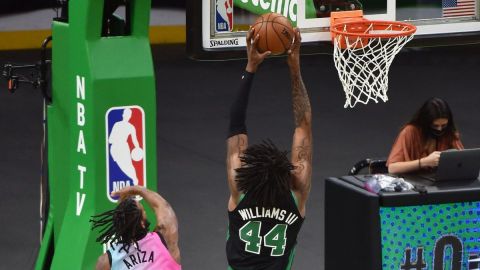