Well, that was weird.

The Red Sox entered (the first) spring training with somewhat high expectations, despite the trading of Mookie Betts and David Price just a couple weeks prior. Even after Chris Sale was forced to undergo Tommy John Surgery, the hope was that Boston would ride its talented offense to relevance, at the very least.

We all know what happened next. No need to give you a COVID-19 pandemic history lesson or a breakdown of baseball labor disputes.

Boston, minus Eduardo Rodriguez, eventually took the field in late July and picked up a season-opening victory against the Baltimore Orioles. But it was all downhill from there as the Red Sox struggled to their fourth last-place finish in nine years and their worst winning percentage in 55 years.

Although accurate, “bad” would be too-easy a descriptor of the 2020 Red Sox. The truth is there is a lot to process, from good to bad to everything in between.

With all that said, here are 20 random thoughts — in no particular order — on the 2020 Boston Red Sox season:

1. This team isn’t that far away
Hey, it’s not like the Red Sox never have gone worst-to-first before. Boston has major questions in the rotation, bullpen, outfield and at second base. The organization parted ways with Ron Roenicke on the last day of the season, and needs to find a manager for the future. But those holes can be filled within a couple years, and the Red Sox still have a ton of talent on the major league roster, as well as more than a few exciting prospects who are knocking on the door. If the rotation is slightly above average next season, this team might compete for a playoff spot.

2. The fake crowd noise was… decent?
Obviously, nothing compares to the genuine, authentic sound of fans at a sporting event. However, the fake crowd noise on Red Sox broadcasts this year — yes, we’re biased — more often than not was very convincing. The hushed “crowd murmur” was particularly effective. Sure, it at times was awkward, but we’ve heard far worse pumped-in crowd noise over the past few months.

3. Phillips Valdez is nice
Valdez joined the Red Sox as an inexperienced unknown, despite being 28 years old. He figured to be just another warm body in the bullpen. But a case easily can be made that Valdez, with his 3.26 ERA in 24 appearances, was Boston’s best reliever. His WHIP (1.615) was high, and his second half wasn’t as good as his first, but Valdez nevertheless could be a useful reliever next season.

4. So were the in-season trades
No, the Red Sox didn’t pull off any blockbusters, but chief baseball officer Chaim Bloom had a solid trade deadline. For Mitch Moreland, the Red Sox got two prospects (Hudson Potts and Jeisson Rosario) who already rank in the top 15 on SoxProspects.com. For Brandon Workman and Heath Hembree, they got Connor Seabold (12th on SoxProspects) and Nick Pivetta, a flawed but insanely talented 27-year-old pitcher. The Kevin Pillar trade might’ve been the best, as Boston landed a potential closer of the future.

5. We were wrong about Jose Peraza
After the Red Sox signed Jose Peraza, we laid out why he had a chance to become one of the steals of the offseason. The veteran infielder had his moments, but only hit .225 with one homer before being demoted to the alternate training site.

6. The Dustin Pedroia story flat-out stinks
Due a chronic knee injury, Pedroia has played in just nine games since 2017 and he missed all of this season. Pedroia and the Red Sox still talk like there’s a chance he sees the field again, but, honestly, it’s looking more and more like his career has reached its end. That would be a major bummer, as Pedroia probably is the best second baseman in franchise history, and might’ve been on a Hall-of-Fame track before injuries ruined his career.

7. There were sooo many different pitchers
Check out this BaseballReference screenshot, which shows every player who pitched in a game this season for the Red Sox:

(Note the three positional players at the bottom.)

8. Fan-less games never felt normal
Basketball, hockey and football broadcasts haven’t suffered too much from not having fans in the stands. Tarps, virtual fans and other bells and whistles have helped make NBA, WNBA, NHL and NFL games feel kinda-sorta normal. Baseball is a different story. Every time a ball is hit in the air, it’s impossible to ignore the stands void of warm, non-cardboard bodies. It’s just weird.

9. Eduardo Rodriguez’s health is a major concern
Rodriguez, the team’s best pitcher in 2019, missed all of this season while dealing with the effects of myocarditis, a heart complication stemming from his preseason battle with COVID-19. The Red Sox have said they believe Rodriguez will be ready to go for spring training, but they also have left the door wide open for the young lefty to remain out for an extended period of time. It’s a scary situation.

10. The future might be bright
The Red Sox farm system bottomed out a couple years ago, but is experiencing a rebound. In particular, players like Jarren Duran and Triston Casas feel like potential future stars. Look in the coming weeks for our extended look at various Red Sox prospects.

11. Leave Alex Verdugo in the leadoff spot
The Red Sox have experimented with the leadoff spot a lot over the past decade, but it looks like they’ve found their leadoff man of the future. Alex Verdugo was the team’s best player in 2020, and overall its brightest spot. Acquired from the Los Angeles Dodgers in the Betts-Price trade, Verdugo hit .308 (despite going 0-for-15 to end the year) with six homers, 15 RBIs and four stolen bases. He also was one of the best defensive outfielders in baseball. Perhaps more than anything, he provided a consistent, refreshing source of energy during a season in which it was in short supply.

12. The Yankees rivalry has zero juice
Since knocking off New York in the 2018 American League Division Series, the Red Sox have struggled mightily against their arch nemesis. The Red Sox were dominated by the Yankees last season and beat them only once this year. Results aside, there is virtually zero hatred between the two clubs. The rivalry is lightyears from where it was in the mid-2000s and is in need of a major spark.

13. Temper expectations for Tanner Houck
Houck, selected in the first round of the 2017 draft, debuted late in the season and looked excellent in all three of his starts. Featuring a nasty slider against righties and an effective splitter against lefties, Houck looked like a legitimate big league pitcher, allowing just one earned run in 17 innings.

However, there’s a real chance he starts the 2021 season with Triple-A Pawtucket. Moreover, Houck hardly dominated while at the alternate training site before his debut, and command always has been an issue for the young right-hander. He has a chance to be good, but his development is far from complete.

Still, hard to not get excited about this:

14. Players deserve credit for limiting COVID-19 impact
Two weeks into the season, the Major League Baseball season felt bound for a premature end. COVID-19 outbreaks within the Miami Marlins and St. Louis Cardinals, in particular, cast doubt over whether MLB, without a bubble, could complete its 60-game season. But teams and players apparently buckled down, as the novel coronavirus was almost a non-issue over the rest of the regular season. As for the Red Sox, they had a few positive cases (including Rodriguez) before the start of the campaign, but were clean thereafter. The playoffs will be played inside multiple bubble locations.

15. Andrew Benintendi will win Comeback Player of the Year next season
This is more of a prediction than a thought, but whatever. Benintendi had a disappointing season in 2019, but many expected him to finally realize his vast potential in 2020. That did not happen. The former top prospect picked up only four hits in 39 at-bats before his season ended after 14 games due to a ribs injury. Still just 26 years old, Benintendi remains highly talented and capable of playing at an All-Star level. Next year is the year… we think.

16. Who’s the closer?
Matt Barnes is a good middle reliever, but at this point it’s clear he’s not a closer. It is what it is. So, who will close for the Red Sox in 2021? Assuming the Durbin Feltmans, Jacob Wallaces and Darwinzon Hernandezes of the world aren’t yet up to the task, the role likely will be filled either by a veteran on the roster (Valdez) or via trade/free agency. We couldn’t possibly guess where this will go.

17. What’s up with J.D. Martinez?
Martinez, perhaps the best true hitter on the Red Sox, was bad this season, and not just when compared to his normally high standards. Boston’s designated hitter batted just .213 with seven homers and a .680 OPS while striking out an alarming 59 times. Martinez can opt-out after this offseason, but recently indicated he’s unlikely to do so. A bounce-back probably is in store next year, but it nevertheless is difficult not to wonder whether Martinez’s days as an elite, middle-of-the-order hitter are over.

18. The managerial search…
This will be the primary offseason storyline until the job is filled. Alex Cora reunion speculation will be impossible to ignore, and the Red Sox already have fielded a ton of questions about the topic since the season ended. Your guess is as good as ours.

19. This is a huge offseason for Rafael Devers
Devers is an MVP-caliber player who showed flashes of that potential at various points during the season. Coming off a breakout 2019 campaign, expectations were sky-high for the young third baseman. After a slow start, Devers caught fire down the stretch and finished with a .263 average to go along with 11 homers and 43 RBIs. It looked as if the awkward circumstances and departure of Cora affected Devers more than anyone else on the roster.

Devers made huge strides on defense last season, but regressed this year. He struggled defensively in summer camp and never recovered, finishing with 14 errors in 57 games. He needs to put in serious work this offseason and show up to spring training ready to go.

20. Jackie Bradley Jr. is a good baseball player
That’s it. That’s the tweet. 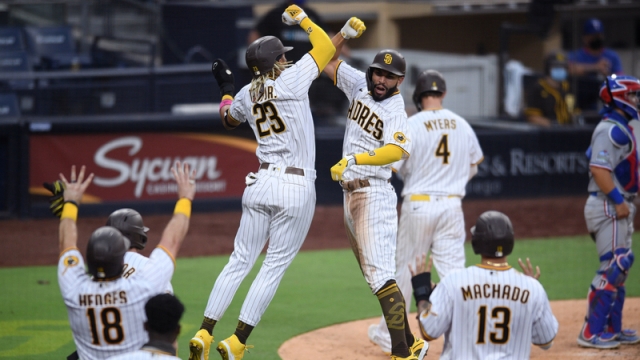 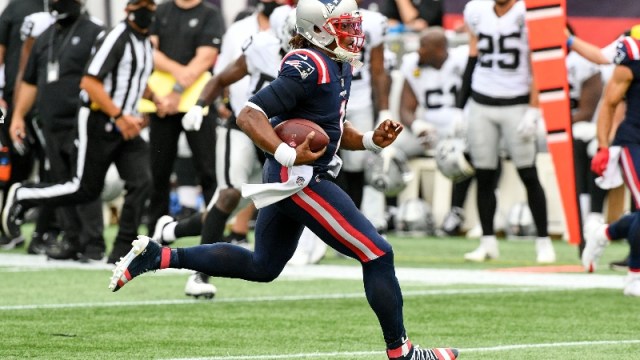 What Stephen A. Smith Views As ‘Beatable’ Patriots’ Ceiling In 2020