We don’t even need to wait for spring training, we can start asking the question now: Will a rotation spot Tanner Houck’s to lose in 2021?

Houck has had a tremendous start to his big league career, and he polished it off with another tidy outing in his finale Saturday. The 24-year-old righty allowed just one run on three hits with 10 strikeouts in six innings in an 8-2 win over the Braves.

It took 15 innings for an opponent (all of which were postseason teams, by the way) to get a run off of Houck. His sweeping slider, somewhat surprisingly, has been as devastating on lefties as it has been righties, making him borderline unhittable most of the time he goes out.

And his early success puts him in some interesting company.

Obviously, it remains to be seen what the Red Sox do this offseason to build the roster. But certainly, Houck’s poise and performance thus far has to be making an impression on chief baseball officer Chaim Bloom.

If nothing else, Houck has impressed Ron Roenicke.

“That was pretty good, wasn’t it?” the Sox manager said after Saturday’s game, over Zoom. “Three great outings for him against some really good teams. Really encouraging what we see in the future for maybe a really nice starting pitcher for us, so that’s great.”

Bright spots were few and far between for the Red Sox in 2020. Houck can find peace in knowing he was responsible for a few of those good moments.

For him though, there’s plenty more to room to grow.

“I know I’ve had some success now, but this game isn’t a sprint. It’s a marathon,” Houck said after the game.

Here are some other notes from Saturday’s Red Sox-Braves game:

— An eight-run second inning is what ultimately powered the Red Sox past the Braves, and it was a Vazquez grand slam that provided the final four runs of the frame.

Vazquez has heated up a little bit at the plate down the stretch, and he paced the Red Sox with three hits Saturday, falling a triple shy of the cycle.

“He continues to swing the bat well,” Roenicke said. “You look up at his average and you think about a catcher having an average like that, there’s not too many catchers that hit .280.”

— Two of Boston’s other runs were thanks to Bobby Dalbec, who blasted his eighth homer of the season earlier in the second inning.

It’s been nothing but a power surge for Dalbec since he’s been called up, and it’s cemented him in some impressive Red Sox folklore.

— Houck originally is from Illinois, but he’s going to be spending the offseason in Florida, he said after the game.

The reasoning? He wants to be able to throw outside all winter, instead of, as he put it, be getting onto a dirt mound for the first time in months when he arrives at spring training.

— There was a scary moment in the top of the ninth inning, when Vazquez ripped a foul ball into the Red Sox dugout.

NESN cameras caught Roenicke on the ground right after the foul ball, but it turns out he actually did not end up getting hit.

“Not the most coordinated move to get out of the way of that,” Roenicke said while laughing. “It was a bullet at me and I tried to spin out of the way and I must’ve tried to step down and I had gone over the step. So there was nothing there and spun and landed on my back in the corner of the bench. So I’m a little sore but I’m OK.”

— The Red Sox will close out their season Sunday against the Braves, and the lineup will feature plenty of regulars.

But Roenicke indicated that after chatting with Alex Verdugo, the outfielder will not play in the season finale.

However, Rafael Devers and Xander Bogaerts likely will play, while Roenicke still needs to figure out a plan with Vazquez.

First pitch for the Sox’s final game of the season is set for 3:10 p.m. ET, with Nick Pivetta getting the ball for Boston. 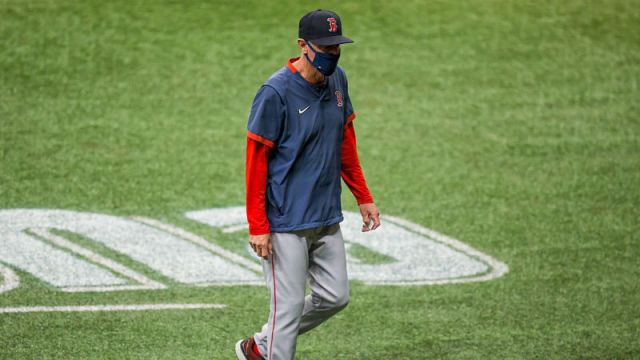 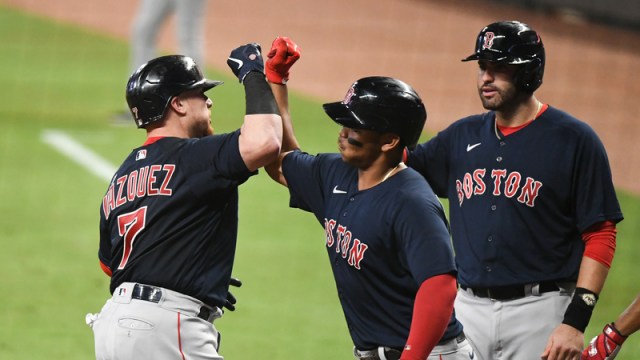