Why does it seem so difficult to play quarterback for the New England Patriots?

The Patriots rank dead last in the NFL with a 65.1 passer rating this season. They’re tied with the New York Jets, of all teams, with that mark.

Everyone is better. No one is worse.

Based on that flawed but all-encompassing stat, the Patriots would have been better off drafting Dwayne Haskins (80.3 passer rating), trading for C.J. Beathard (89), Nick Mullens (87.4), Kyle Allen (99.4), Nick Foles (77.6) or Mitchell Trubisky (87.4), signing Joe Flacco (65.2) or claiming Brett Rypien (66.1) rather than trotting out Cam Newton, Jarrett Stidham and Brian Hoyer so far this season.

Teams are forced to play terrible quarterbacks all the time. A fella named Ben DiNucci played for the Dallas Cowboys this week. He has a passer rating almost double that of Patriots quarterbacks at 109.7. How did the Patriots pick the combination of the absolute worst three?

Patriots quarterbacks have combined to complete 116 of 180 passes for 1,183 yards with three touchdowns and 11 interceptions this season. Newton is responsible for two of those TDs and seven of those picks. The 1992 Patriots QBs — Hugh Millen, Scott Zolak, Tom Hodgson and Jeff Carlson — had a worse passer rating (63.2) than the 2020 crew but a better touchdown-to-interception ratio (13-to-19).

So, is it the players, the system or a combination of both? The easy answer is to say both. The surface answer is to say the system, if only because it seems impossible that the 49ers have three better quarterbacks than anyone on the Patriots’ team. Most teams don’t completely and entirely crater when their starting quarterback goes down. The Patriots’ offense currently is imploding with their starter on the field. It’s pretty ironic that Tom Brady used to be known as a system quarterback when these numbers are being spat out by QBs playing in that same supposedly passer-friendly system.”

Newton is having some serious issues right now, and he acknowledged they’re mental mistakes on WEEI on Monday morning.

Newton was targeting wide receiver Jakobi Meyers in the bottom middle of the screen on this pass on first-and-10. There was absolutely no way that Newton was going to throw it through or over 49ers linebacker Fred Warner, who’s streaking in front of Meyers. Newton threw the ball low, and Warner easily picked it off for an interception.

Here’s the sideline view. This is a situation where Newton would have been better off tucking the ball and running it.

Here’s what Newton saw on his second interception, another target to Meyers on first-and-10:

Meyers is at the 43-yard line near the bottom right of the screen with a defender in front of him. Meyers tripped, and Newton overthrew the ball for another easy pick. There were only 36 seconds left in the first half, but he had running back James White and tight end Dalton Keene leaking out into the flats.

The Patriots faced third-and-16 at San Francisco’s 27-yard line on this play:

The Patriots weren’t going to pick up a first down with any of those routes, but four pass-catchers have at least a yard of separation on their defenders.

With some decent blocking, rookie tight end Dalton Keene, wide open at the 25-yard line at the top of the screen, might have some room to run. Newton held the ball, almost got sacked, spun out, tucked the ball and scrambled for 4 yards, taking a shot to the helmet in the process.

It’s worth noting that Keene is to Newton’s right. Newton threw just one pass to the outside right against the 49ers, and it was this throwaway, another first-and-10 situation:

49ers defensive lineman Javon Kinlaw is in the process of beating right guard Shaq Mason. Newton wound up scrambling to his right and throwing the ball away. If Newton could have anticipated where all of his open receivers were going to be, then he could have got rid of the ball a split second sooner for a potential gain.

And here was Newton’s final interception:

He threw to Edelman at the 30-yard line. Seems impossible that it could have been an interception, right? Edelman started shuffling into the middle of the field, Newton’s throw went to where Edelman previously was, off his left hand and into a 49ers arm for an interception.

The Patriots’ offense is predicated so much on timing, which is Newton’s biggest current flaw. He’s waiting for his receivers to get open rather than trusting that they’ll be where they’re supposed to be. It’s a recipe for disaster, because Newton has small windows to make throws, and by the time they close, his receivers aren’t open or he has pressure bearing down.

Stidham doesn’t seem to have the same issues with timing, but he just can’t stop throwing interceptions when he’s on the field. It would, possibly, be interesting to see him start a game rather than coming in while the Patriots are trailing.

It wasn’t all bad for Newton on Sunday. He made some nice throws to Meyers, but it was all too little too late in the midst of a 49ers blowout victory. Some of Newton’s worst throws also had messy mechanics where his front foot was pointing haywire.

So, what happens now? The Patriots either need to completely alter their offense or Newton has to start closing his eyes and trusting he can get the football where his receivers are expected to be at the exact moment they’ll be there. It’s a tough ask, but Newton is a good quarterback with plenty of experience. (It might also help if the Patriots had wide receivers Newton knows he can trust, but that’s another story.)

Meyers did seemingly help as he picked up 60 yards on four catches with another 23 yards called back because of a penalty. He was by far the Patriots’ best pass-catcher Sunday afternoon. 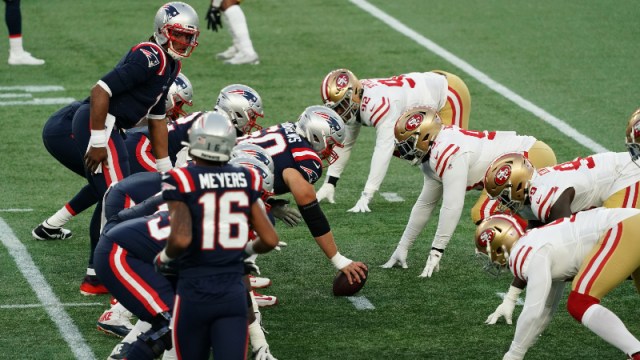 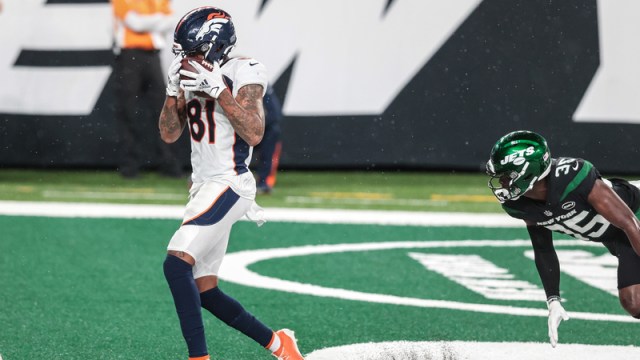