This probably isn’t how the Celtics wanted to start 2021.

Boston got off on the wrong foot in Friday’s game against the Pistons, but showed their resolve with an impressive second-half comeback. Detroit still managed to outlast them, beating the C’s 96-93 in Game 1 of their two-game set in the Motor City.

Jayson Tatum and Jaylen Brown dazzled once again, combining for 53 points on 52.7% shooting. But it simply wasn’t enough to outlast the Pistons, who leaned heavily on Jerami Grant (24 points), Derrick Rose (17 points) and Saddiq Bey (17) in their first win of the season.

SLOPPY START
Boston got off to a sluggish start, and it cost them early on.

The Pistons got things going with a 9-2 run in the first four minutes before opening up an 18-point lead midway through the quarter. Grant led all scorers with 10 points, while Rose began to find his rhythm toward the end of the first.

C’s head coach Brad Stevens shook things up early to try to find a spark, but to no avail. Boston sank just five of 19 shots attempted and committed a whopping eight turnovers in the first 12 minutes.

Detroit finished the quarter up 27-12. It was the Celtics’ lowest-scoring quarter since Dec. 2017, per Forbes’ Chris Grenham.

STILL NO LUCK
Boston tried to turn things around in the second, but Detroit kept its foot on the gas.

The C’s did look better, shooting 12-of-20 from the field and finishing the half shooting 43.6%. The Pistons remained in control, though, thanks to dominant performances from Grant and Rose, who combined for 29 first-half points on 12-of-19 shooting.

Boston did make it a 13-point game with less than a minute left in the half, but Detroit managed to push its lead back up to 15 right before the buzzer.

Brown, Smart and Teague, meanwhile, had eight points apiece for the C’s.

A SPARK?
The C’s wasted no time getting back into the game, cutting the Pistons’ lead in half on a 9-3 run to start the third.

And, like always, Brown made things happen on both ends of the court.

Detroit’s lead hovered around nine for much of the quarter. Tatum brought the Celtics within five a couple of times, but the Pistons always responded with some quick buckets of their own.

Tatum’s 14 third-quarter points paid dividends for Boston in the long run, though, and kept the C’s within striking distance.

A Grant Williams layup (on a great assist from Tatum, no less) made it a four-point game with just 20.5 seconds left in the third.

And just like that, the C’s were back in it.

Brown and Tatum combined for 44 points on 20-of-26 shooting in the first three frames.

BOSTON’S BACK
The C’s didn’t let up in the fourth, taking their first lead since the first quarter after just one minute thanks to a 7-0 run from Brown.

Detroit snatched the lead back a couple of minutes later on an Isaiah Stewart layup. So, Boston did the same and took a five-point lead (with some help from Tatum, of course).

But Detroit still had some gas left in the tank. The Pistons went back up one on a Rose layup in transition and pad the lead with a couple of made free throws in the finals seconds.

It didn’t matter though, because Boston wasted every opportunity it had in the last minute to tie it up.

The Pistons walked away with a gritty 96-93 win.

PLAY OF THE GAME
So much yes.

UP NEXT
The Celtics and Pistons will play Game 2 of the set Sunday afternoon, with tip-off slated for 3 p.m. ET. 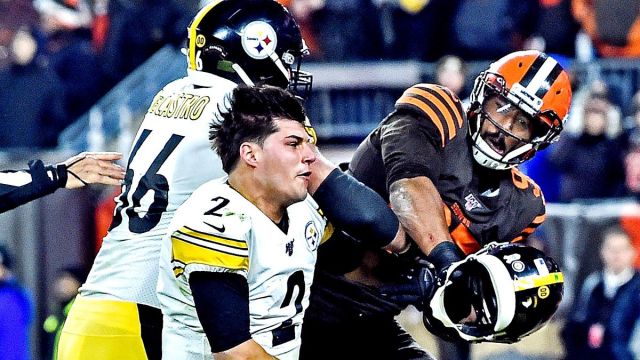 Mason Rudolph Willing To Talk With Myles Garrett About 2019 Brawl 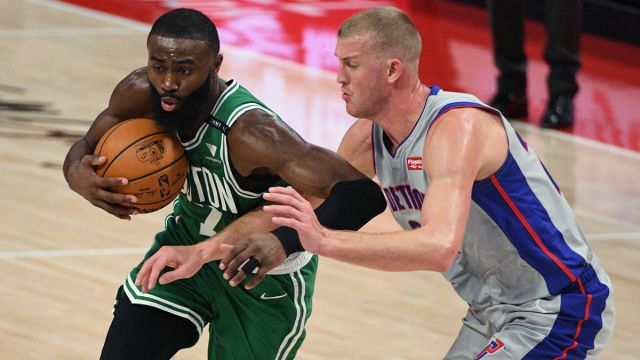