The New England Patriots will kick off their NFL preseason schedule Thursday night against the Washington Football Team, and all eyes will be on Cam Newton and Mac Jones as they compete for the starting quarterback job.

Dan Orlovsky, a former NFL QB, explained Thursday on ESPN’s “Get Up” what could wind up being the determining factor in the position battle.

“Who hurts their football team the least — I think that’s going to go a long way toward determining who’s going to be the guy,” Orlovsky said. “And I’m not talking about strictly just interceptions. But this is a football team, and I’ve said it all offseason, that is going to ask the least amount from their quarterback maybe out of anybody in the NFL. Dominant offensive line and run game, and the defense is going to be back to being really good. So what quarterback hurts their offense the least?”

” … There is a very specific style this offense is going to play with,” he added. “And I think on top of the interceptions, what quarterback does the least amount of that (Thursday) is going to go a long way to kind of catapult them to being their guy.”

The ex-Detroit Lions quarterback summarized that Newton or Jones will need to adapt under pressure and make smart plays when all odds are stacked against them. Whether it’s preventing a loss of yards by tossing the ball away instead of giving up a sack, or avoiding forcing any balls that potentially could be intercepted, minimizing mistakes likely will be a crucial factor in Bill Belichick’s QB decision.

“(Belichick’s) talked about efficiency and consistency at that spot,” Orlovsky said. “You can’t be efficient and consistent while making mistakes, mental errors at the quarterback spot. I think it’s huge starting (Thursday) for both those guys.” 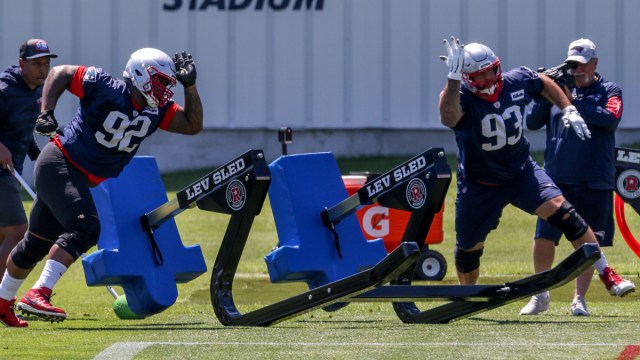