FOXBORO, Mass. — Sunday’s game at Gillette Stadium offered a familiar sight for Patriots fans: a total trouncing of the Jets.

New England earned an easy, 54-13 victory over New York, which lost rookie quarterback Zach Wilson midway through the second quarter due to a knee injury. Mike White, a fifth-round pick in the 2018 NFL Draft, filled in for Wilson and completed 20 of 32 passes for 202 yards and one touchdown to go along with two interceptions.

Patriots rookie Mac Jones completed 24 of his 36 passes for 307 yards and two touchdowns.

New England improved to 3-4 with the win, while New York dropped to 1-5 with the loss.

Here are the top highlights from Sunday’s game between the Patriots and Jets:

— Facing 2nd-and-15 on his first drive, Jones found Jonnu Smith for a 28-yard catch and run. On the next play, New England ran a double-pass with receiver Kendrick Broune hitting Nelson Agholor for a 25-yard touchdown.

It was the third pass completion by a Patriots receiver this season, with Jakobi Meyers accounting for the other two.

— New England forced the Jets to punt on their first series. Shortly afterward, Damien Harris broke free for 32 yards and later punched it in from the 1-yard line.

— The second Jets drive ended with a missed field goal. The ensuing Patriots drive almost began with a terrible interception from Jones.

— The Patriots wound up settling for a field goal. New York’s next drive was an eventful one.

Wilson suffered a knee injury while making a deep pass attempt toward the end zone. He eventually walked to the locker room under his own power.

— The Patriots came right back with a score of their own. Facing 3rd-and-10, Jones scrambled for 13 yards — his longest rush of the season. The drive ended with a 15-yard catch-and-run touchdown from Brandon Bolden.

— New England punctuated an impressive first half with this TD connection from Jones and Hunter Henry:

— New York drove it down New England’s throat with its opening possession of the second half. Elijah Moore capped off the drive with a 19-yard rushing touchdown.

— After yet another field goal from Nick Folk, the Jets brought the ball into New England territory and seemingly were set up for at least three more points. Then, White threw this interception to Dugger:

— The Patriots wound up punting to the Jets, who later gave the ball back when J.C. Jackson intercepted White. Damien Harris eventually scored from 1 yard out, his second touchdown run of the game.

It was the first multi-TD game of Harris’s career.

— The Patriots poured it on in the fourth quarter, with Jones finding Bourne for a huge gain that set up the first touchdown run of J.J. Taylor’s career.

— N’Keal Harry’s only catch of the day set up another short-yardage score from Taylor. 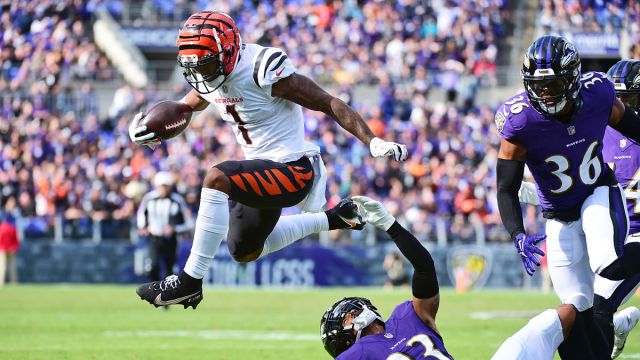