The Boston Bruins had the Edmonton Oilers breathing down their necks all Thursday night.

Boston got on the board first in both the first and second periods, but both times, Edmonton tied it back up within a minute. The Bruins managed to score before the end of the second, but that meant keeping Connor McDavid and the Oilers at bay for the entire third.

The pressure got to them, as defensive breakdowns and one-too-many passes on offense allowed Edmonton to take over in the final period before earning the 5-3 victory.

“We absolutely beat ourselves,” head coach Bruce Cassidy said after the game. “100 percent. So I have to do a better job. When a team beats itself, that’s on us as a staff. We need to do a better job of getting them ready to play.”

Fatigue and a lack of focus held Boston back in the third, and two periods trying to keep up with a quick team like Edmonton started to show.

Brandon Carlo didn’t put nearly enough on a pass in the third, sending it off the heel of his stick across the middle of the defensive zone for Leon Draisaitl to grab ahold of and score.

Just minutes later, the Oilers netted the go-ahead goal three minutes later after what looked like a miscommunication between Carlo and Matt Grzelcyk.

After putting the Bruins ahead with a goal at the end of the second, Carlo’s third period was a little rough.

“Sometimes you let your foot off the gas when you score a goal instead of keep going at it, to be completely honest,” goalie Linus Ullmark said. “Like today was just one of those days where there were some unlucky bounces. What are you going to do about it? You know, we had some breakdowns and whatever, it’s gonna happen. It’s not the end of the world, it’s early in the season.”

Here are more notes from Bruins-Oilers:

— Carlo, after a rollercoaster of a game individually, didn’t mince words after the game regarding his part in the third period collapse.

“One of the worst ones I’ve had in my NHL career,” Carlo said.

— Cassidy wasn’t particularly upbeat after the game, either. The head coach put the Bruins’ struggles on the shoulders of the coaching staff.

“As a staff we have to do a better job of getting the players to understand what they can be successful at, how they can help the team win.”

— Connor McDavid is quite good, and a quick team like the Oilers can be intimidating. But Ullmark didn’t have that mentality, making 23 saves on 28 shots.

“I can not speak for anyone else than me, I enjoy it,” Ullmark said. “I love playing these guys. I mean, there’s a reason why McDavid is the best player out there. It’s so fun playing against the best and that’s what we do. We’re in the National Hockey League and we’re playing the best so own up to the challenge. Learn from it, love it, accept it, you know?”

— Brad Marchand improved his home point streak to six games with a goal in the second period — the most since his 10-game streak in the 2019-20 season.

— Silver linings? The fourth line consisting of Tomas Nosek, Anton Blidh and Curtis Lazar did as good a job as you could ask for in quieting McDavid and Co.

“Outstanding,” Bruce Cassidy said of their performance. “I;ve got no issue with their line. They did a terrific job, they checked well. managed the puck well, both people. Limited the damage, D-zone coverage was solid. I know McDavid got in a couple of times but I think some of those were broken plays.”

— The Bruins can get back in the win column Saturday as they travel to New Jersey to face the Devils at 1 p.m. ET. 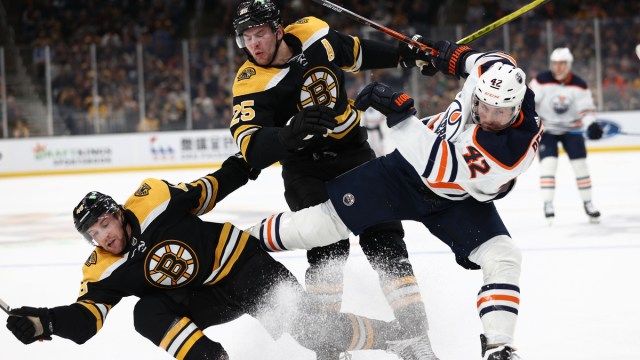 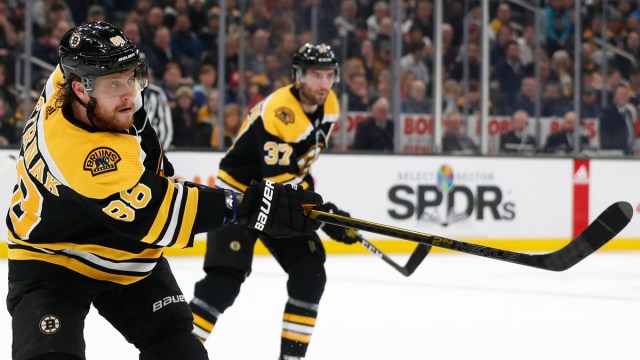