The Boston Red Sox have plenty of decisions to make this offseason, but the process for making those calls likely will be affected by a decision made by slugger J.D. Martinez.

The right-handed hitter, who has been a fixture in the heart of the Boston batting order since signing prior to the 2018 season, has a player option for the 2022 season. He must decide whether he wants to exercise that option for the upcoming season and make the reported $19.35 million (per Spotrac) left on the five-year deal he signed in 2018.

The Athletic’s Ken Rosenthal spoke about Martinez’s contract situation Monday on “The Athletic Baseball Show” podcast (with a tip of the cap to @RedSoxStats). Rosenthal actually expects Martinez to leave the guaranteed money on the table and test the market.

“That’s not (the Red Sox’s) choice, that’s his — I expect him to opt out,” Rosenthal said on the podcast. “He’s got one year, over $19 million left on that deal. Can he beat that deal on the open market? Yes, absolutely he could.”

To hear Rosenthal speak with such conviction about Martinez’s thought process is interesting. It’s possible Rosenthal, one of the top insiders in the sport, through back channels already knows which way Martinez is leaning. It’s also interesting, at least for us common people, to watch someone walk away from $19 million guaranteed with confidence even more money is out there.

That’s not to say Martinez shouldn’t feel good about his potential earning power. Aside from a woeful 2020 season that was awful for just about everyone with “BOSTON” across their chests, Martinez has done exactly what has been asked of him as a baseball-mashing mercenary with the Red Sox. He was a needed lineup upgrade when signed, and it’s no coincidence the Red Sox won 108 games and a World Series in 2018, the best campaign of the DH’s career. In four seasons with the Red Sox, Martinez has averaged 37 home runs and nearly 120 RBIs per season.

He is, however, 34 years old, which is not ancient by any measure, but he is on the back nine of his impressive career. The production is still there just not quite as voluminous as it once was. Martinez had a gaudy 155 OPS+ in his first two seasons with the Red Sox and a 114 OPS+ over the last two. It would not be shocking if he opted in, made the last of his money and checked out the landscape again next winter — especially with the economic future of baseball so uncertain at the moment.

Martinez is a pivotal domino for the Red Sox, too. If he opts in, he’s back at a relatively good number, assuming there’s no major dropoff. If he opts out, then things get far more interesting, if not uncertain as it pertains to the Sox.

There’s no reason to believe the Red Sox wouldn’t want him back, but at what cost? And if a new collective bargaining agreement is reached this winter, does it come with a universal DH? If that’s the case, then a Martinez opt-out makes far more sense by literally doubling his market.

What happens with Martinez also dictates what else the Red Sox do with other players in the offseason. Perhaps no player is more indirectly impacted by Martinez’s situation than Kyle Schwarber. He was an invaluable addition to the Boston lineup after being acquired at the deadline. But he was an imperfect fit, too. He’s a natural outfielder who could obviously DH, positions filled when he arrived in Boston. The first base experiment left plenty to be desired.

If Martinez leaves, however, Schwarber seems like the perfect option to replace him as a DH who plays the outfield once or twice per week. Then again, if there’s universal DH, that drives up his price, too.

If both Martinez and Schwarber bounce, the Red Sox must take the money earmarked for one or both of those two and find a way to reinforce the middle of the lineup. Losing Martinez, a staple of the lineup for one of the best offenses in the sport, is a very real concern.

Or, on the other hand, the money could be turned around and reinvested into pitching as a way to combat potential offensive losses. Eduardo Rodriguez’s own looming free agency is worth noting at this point, too.

Adding to the temporary holding pattern is the aforementioned CBA. We still don’t know what the financial framework will be for 2022 and beyond, which complicates matters further. Regardless, it sounds as if the Red Sox will be active this winter.

That, plus the uncertainty surrounding Martinez and more, make this one of the more fascinating Red Sox offseasons in quite some time. 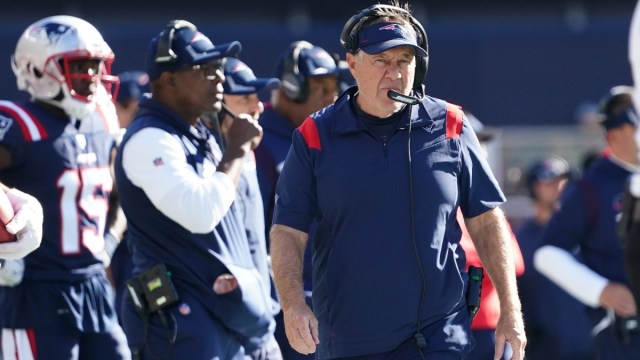