Patriots Free Agents: Who Stays, Who Goes Ahead Of 2022 Season? Skip to content

The New England Patriots’ 2021 season officially came to an end Saturday night in Buffalo. Over the next two months, they’ll need to decide which of their players will be back for 2022.

The Patriots, who were bounced from the NFL playoffs with a 47-17 loss to the Bills, have a total of 15 players set to hit unrestricted free agency when the new league year begins in March, plus four impending restricted free agents.

New England already locked up one of its free agents, signing safety Adrian Phillips to a three-year extension on New Year’s Day. Here’s a rundown of the other Patriots players set to hit the market this spring (contract info via Spotrac):

S Devin McCourty
Current contract: Two years, $23 million
The last time the Patriots played a game without McCourty in the lineup? Week 16 of the 2015 season. He’s played almost every snap for this defense over the last decade. But at 34, the longtime co-captain is one of several players on this list who could retire this offseason. If he opts to keep playing, would he and the Patriots be able to agree on a new contract? McCourty had New England’s highest base salary ($8 million; tied with linebacker Dont’a Hightower) and second-highest salary cap hit ($11.1 million) this season. With the cap hits for several 2021 signees shooting up in 2022, he likely would need to accept less to return.

LB Dont’a Hightower
Current contract: Four years, $35 million
Hightower’s physicality and “Trash Man” influence helped power the Patriots’ seven-game win streak, but he appeared to wear down late in the season and really struggled in Saturday’s wild-card playoff loss as he returned from a knee injury. Assuming the 31-year-old plans to keep playing, he, like McCourty, almost certainly would need to take a pay cut in order to re-sign this offseason. Hightower carried an $8 million base salary and a $12.4 million cap hit in his return from a 2020 opt-out. With the Patriots lacking youth and speed at the linebacker position, it’s fair to wonder whether the three-time Super Bowl hero will be back.

OT Trent Brown
Current contract: One year, $9 million
A calf injury limited Brown to just seven snaps over the Patriots’ first nine games, but his play mostly ranged from good to excellent after his Week 10 return. Head coach Bill Belichick said in December that having his super-sized right tackle back had “changed a lot of things offensively for the better.” Brown has spoken glowingly about his love for the Patriots organization. Would he be open to a hometown discount?

CB J.C. Jackson
Current contract: One year, $3.384 million (second-round RFA tender)
With eight interceptions (second in the NFL), 23 passes defended (first) and a 47.8 passer rating against (second among cornerbacks with 150-plus coverage snaps), Jackson has set him up for a massive pay raise this offseason. If he hits free agency, the Pro Bowler and second-team All-Pro would be the top cornerback on the market — and might command more money than the Patriots would be willing or able to pay. That makes Jackson a prime candidate for the franchise tag. With no obvious replacement in the pipeline, letting him walk would leave a massive hole in New England’s secondary.

LB Ja’Whaun Bentley
Current contract: Four years, $2.76 million
With 108 tackles, five tackles for loss, five quarterback hits, three forced fumbles and two pass breakups, Bentley picked a great time to have the best season of his career. As a bigger, slower linebacker, the 2018 fifth-round draft pick won’t be a fit for every defense, but he should receive a nice pay bump over the paltry $920,000 in salary he’s making this season. Bentley had a career-high 17 tackles against Miami in Week 18 before an arm injury knocked him out of Saturday’s playoff loss.

OL Ted Karras
Current contract: One year, $3 million
Karras’ October insertion into the starting lineup helped stabilize what had been a chaotic and ineffective offensive line, and his play at left guard prompted New England to move promising second-year pro Mike Onwenu to the bench. Karras clearly is a starting-caliber player, but his future with the team likely hinges on what the Patriots plan to do with Onwenu, who also plays tackle. Center David Andrews and right guard Shaq Mason both have multiple years left on their contracts, though the latter could become a cap casualty at some point.

ST Matthew Slater
Current contract: Two years, $5.3 million
Slater considered retirement in each of the last two offseasons. Will this be the year the special teams legend finally hangs ’em up? Despite his advanced age, the 36-year-old still is one of the NFL’s best at what he does, representing the AFC in 10 of the last 11 Pro Bowls. Slater wouldn’t reveal his plans after Saturday’s loss, though he did acknowledge he’s “closer to the end.”

RB James White
Current contract: One year, $2.46 million
One of the best pass-catching backs of the Belichick era, White re-signed on a one-year contract last offseason, then suffered a season-ending hip injury in Week 3. He was away from the team for most of the season but remained in contact with New England’s running backs, sharing insight from afar. It’s unclear whether the Patriots intend to bring him back for an eighth season.

RB Brandon Bolden
Current contract: Two years, $3.7 million
A longtime special teams stalwart, Bolden greatly expanded his role this season, assuming all of White’s third-down back duties after the latter was lost for the season. He’s one of Belichick’s favorite players and should be considered a near-lock to re-sign if he wants to return.

ST Brandon King
Current contract: Two years, $3.7 million
This was a quietly impressive comeback for King, who ranked fourth on the Patriots in special teams snaps played and third in total special teams tackles after injuries wiped out his 2019 and 2020 seasons.

QB Brian Hoyer
Current contract: One year, $1.075 million
Having an experienced backup like Hoyer was highly beneficial for rookie quarterback Mac Jones. But is the 36-year-old in the Patriots’ future plans? Would they want to bring Hoyer back for another season? Does he even want to play another season? Jarrett Stidham has one year left on his rookie contract, so he could be Jones’ understudy in 2022 if Hoyer doesn’t return.

K Nick Folk
Current contract: One year, $1.075 million
The 37-year-old Folk has been one of the Patriots’ most consistent players over the last two seasons. He went 36-for-39 on field-goal tries during the 2021 campaign and hasn’t missed a field goal from inside 50 yards since Week 1 of last season — a streak of 56 consecutive makes. Folk has beaten out inconsistent rookie kickers in each of the last two training camps and said he plans to keep playing. With the way he’s performed, it wouldn’t be surprising to see the Patriots bring him back for another camp battle.

LB Jamie Collins
Current contract: One year, $1.075 million
Collins was a solid depth piece in his third Patriots stint, earning the highest Pro Football Focus grade of any New England defender. Since most of the NFL probably now realizes he performs better with the Patriots than he does anywhere else, the 32-year-old likely wouldn’t cost much to re-sign if they opt to do so.

DT Carl Davis
Current contract: One year, $1.078 million
Davis made some key plays during the Patriots’ midseason win streak, but he finished the year as PFF’s lowest-graded interior defender (127th out of 127 qualifiers) and was a healthy scratch for the playoff game.

LB Harvey Langi
Current contract: One year, $920,000
Langi made the roster as a special teams-focused linebacker, but he landed on injured reserve after Week 7 and did not return. His position is easily replaceable, so the Patriots could choose to let him walk.

Meyers led the Patriots in catches (83) and receiving yards (866) this season, setting personal bests in both categories and catching the first two touchdown passes of his NFL career. Olszewski didn’t replicate his first-team All-Pro campaign from 2020, but he ranked second in the NFL in punt-return average and third in punt-return yards. Johnson, a product of the NFL’s International Pathway Program, played 28% of offensive snaps this season in the Patriots’ run-focused offense.

NFL teams can choose to “tender” their own RFAs at a first-, second- or original-round level, which would award them a corresponding draft pick if the player signs elsewhere. Since Meyers, Olszewski and Johnson all were undrafted, an original-round tender would yield no draft-pick compensation.

Tight end Troy Fumagalli, who was waived with an injury designation during training camp and reverted to injured reserve, also is an RFA. 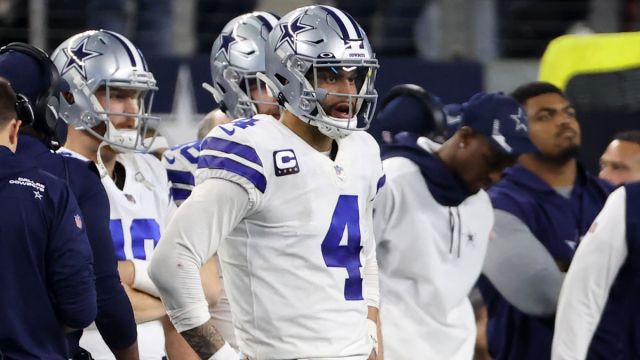 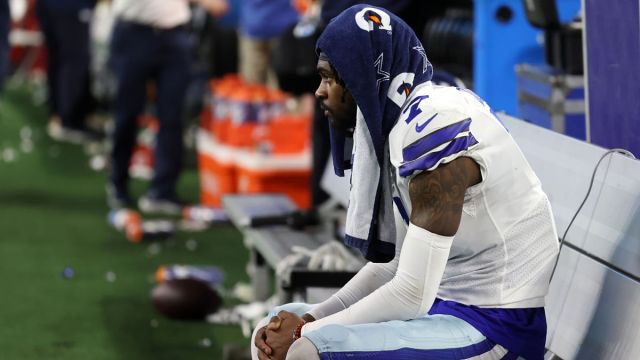 Skip Bayless Had Full-Fledged Meltdown About Cowboys’ Loss To 49ers