Marc McLaughlin is on top of the world.

The Boston Bruins forward and Billerica, Mass., native scored Thursday night at TD Garden in his NHL debut, in front of legions of his family and friends, in his hometown team’s 8-1 win over the New Jersey Devils.

That sentence contains a lot, so give it another read.

The storybook opening to McLaughlin’s NHL career is worth reliving from start to finish. Let’s take a deeper look into how it all went down.

The Bruins signed McLaughlin, 22, out of Boston College on March 15 as a free agent and initially assigned him to the AHL Providence Bruins. Boston recalled him March 20 on an emergency basis, and he practiced well-enough to earn a spot in the Bruins’ lineup, and the No. 26 jersey, for the matchup with the Devils after an illness sidelined Craig Smith.

Upon learning McLaughlin was set to play in Bruins-Devils, his supporters flocked in droves to TD Garden. He told reporters at a pregame press conference he was expecting 50-plus of his family and friends to be on hand, and just about everyone at TD Garden felt their presence, especially after he took the ice during warmups.

“I wasn’t trying to look around too much,” McLaughlin told reporters after the game, per the Bruins’ website. “I was trying to treat it like another game and stay present. I felt comfortable. Curtis Lazar, Freddy (Trent Frederic), and (Weymouth, Mass., native Charlie) Coyle were all joking with me, making me calm down a little bit and get into a groove.”

“It was funny looking over in warmups and seeing the crowd that he had here,” Marchand said at a postgame press conference, per the Bruins’ website. “It’s such a surreal feeling for him, I’m sure, being a local kid getting the opportunity to play here.

“We were talking before the game a little bit in the gym, and he was talking to (Boston native Matt Grzelcyk) about his first game here. It must be very special for their whole family. We’re very happy for him. He’s such a good kid. You always love to see that.”

McLaughlin and Co. already were buzzing when the game started and they nearly blew the roof off of the building 12:04 into the second period when the Bruins’ latest local hero received a pass from Frederic and fired his shot past Devils goaltender Nico Daws.

“Yeah, it was pretty special,” McLaughlin told reporters at a postgame press conference, per NESN.com’s Sean T. McGuire. “I feel like I’ve lived that moment as a kid 100 million times down in my basement or shooting pucks or something.

” … Yeah, I saw my mom jumping up and down. It was pretty cool to see. I’m blessed with having such a supportive family, friends, my teammates were here tonight. That means a lot to me to see them out here supporting me so I can’t wait to see them after.”

Bruins players and staff celebrated McLaughlin’s goal as intensely as his family.

“Well, did you see the bench?,” Cassidy asked reporters, per Maguire. “… I think every guy on the bench was excited for him. He’s a hard-working kid. To get your first goal in front of your parents and your family, it’s a nice thing to be able to do. I think everybody is really happy for him. He earned it. He played hard.”

“We were really excited for him,” Marchand told NESN’s Sophia Jurksztowicz following the game. He’s such a great kid. He’s been working really hard. Obviously being from here, it’s a very special moment for him. He had all his family and friends on the glass in warmups. If you’re going to do that, you’d better score a goal for them. Very happy for him. It’s the first of many for him.”

McLaughlin’s goal was one of six the Bruins scored in the second period, as they coasted to victory. He secured the puck from his first NHL goal.

McLaughlin told reporters of plans for the puck.

“I’ll probably just bring it back to my family, keep it in my home in Billerica, for sure,” he said at a postgame press conference, as seen in a team-provided video.

Nothing could be more appropriate.

McLaughlin’s pro career undoubtedly will include peaks and valleys. Regardless of how it unfolds, no one should forget the ultimate Bruins high that was his debut. 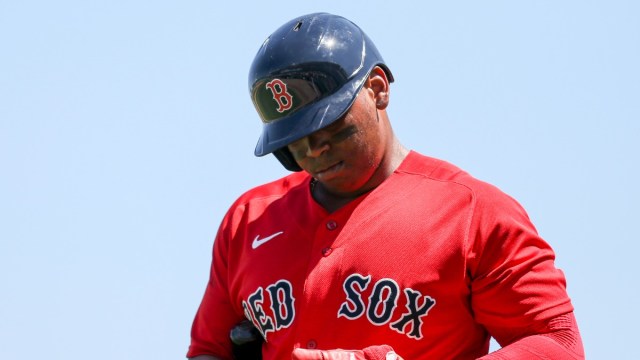 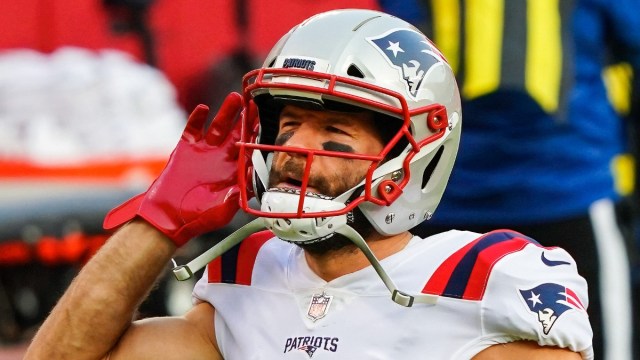