BOSTON — Marc McLaughlin made his NHL debut Thursday with his family, friends and more than a dozen Boston College teammates watching on at TD Garden as the Boston Bruins earned a dominant 8-1 victory over the visiting New Jersey Devils.

McLaughlin’s memorable moment reached its climax 12:04 into the second period, though, as the forward skated down the ice on a 2-on-1 with Trent Frederic and one-timed a perfectly-placed breakaway bid for his first NHL goal. It was one of Boston’s six second-period tallies, propelling the Bruins to a victory where they never trailed.

“Yeah, it was pretty special. I feel like I’ve lived that moment as a kid 100 million times down in my basement or shooting pucks or something,” McLaughlin, a native of Billerica, Mass., said after the win. “But for it to come true here and get in a game and obviously be able to contribute with goal, it’s really special. Coming into it, the boys definitely loosened me up a bit, made me feel comfortable in the room. I feel like that went a long way getting out there for the first time.”

McLaughlin, who admitted he likely was mimicking Bruins captain Patrice Bergeron when taking part in those basement hockey sessions more than a decade ago, said it was just as special to see his supporters celebrate his goal on the TD Garden Jumbotron.

“Yeah, I saw my mom jumping up and down. It was pretty cool to see,” McLaughlin said. “I’m blessed with having such a supportive family, friends, my teammates were here tonight. That means a lot to me to see them out here supporting me so I can’t wait to see them after.”

“Well, did you see the bench?,” Cassidy said to reporters. “… I think every guy on the bench was excited for him. He’s a hard-working kid. To get your first goal in front of your parents and your family, it’s a nice thing to be able to do. I think everybody is really happy for him. He earned it. He played hard.”

Here are more notes from Bruins-Devils:

“Good effort. There was a real good forecheck once, he knocked (defenseman Ty) Smith off the puck, he doesn’t recover, we score a goal a little bit after that. So those are some things we want him to do,” Cassidy said of DeBrusk. “I thought he attacked when he had opportunities, his legs were there, he attacked the net.”

— Marchand had his hat-trick goal waved off late in the second period, with the Bruins possessing a seven-goal advantage, but fans at TD Garden already had thrown their hats onto the ice in celebration. It made for a bit of a strange situation, which Cassidy said he had never seen before.

“No, I’ve never seen that. So do we refund the hats? How does that work? Do they get the hats back?,” Cassidy said, comically.

— The Bruins, in three games this season, swept the junior varsity Devils while outscoring the club 18-6. Boston scored five or more goals in each of the three contests.

— Josh Brown made his Bruins debut, and got into a fight during literally his first shift, but wasn’t able to get through an entire game. Brown left Thursday’s game early with an upper-body injury, per Cassidy.

“He’s another guy that answered the bell early, sort of calmed down some of that physical stuff. Did a good job,” Cassidy said. “Unfortunately, we haven’t seen him play here so not being able to finish the game, it would have been good to get him some minutes (late).”

— Tuukka Rask took part in the ceremonial pregame puck drop before Thursday’s game. Rask spoke with reporters before the contest expressing that he did not regret retiring from the NHL in February and teasing his next position with the organization.

— The Bruins return to the ice Saturday as they host the Columbus Blue Jackets. Puck drop is set for 7 p.m. ET after an hour of pregame coverage on NESN. 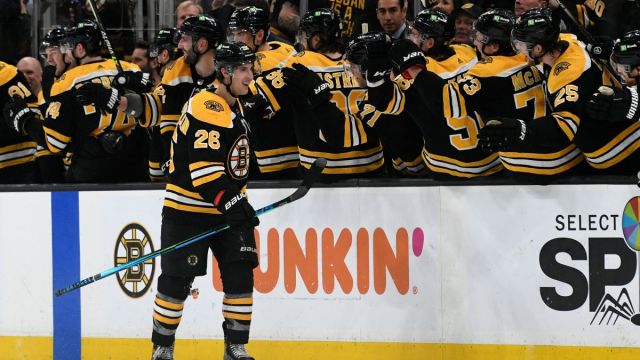 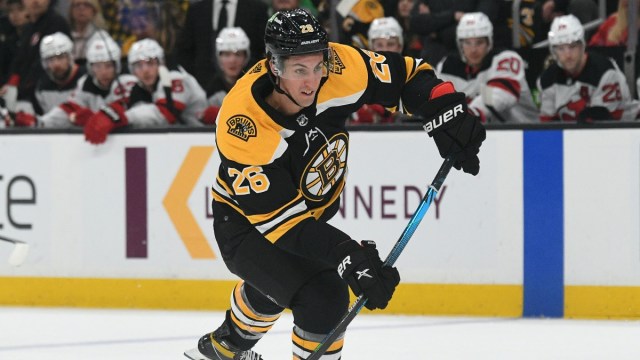