All in attendance at Yankee Stadium didn’t go home happy despite viewing a 5-4 victory between the New York Yankees and the Boston Red Sox on Friday, due in large part to the homerless showing from American League MVP favorite Aaron Judge.

Judge, who still remains at 60 total home runs during his electrifying campaign, sits one homer shy of the tying and two for sole possession of Roger Maris’ all-time American League record.

Hill, who faced iconic former San Francisco Giants slugger Barry Bonds at the beginning of his career, came face-to-face during his latest outing against a similar offensive threat in Judge.

“He’s put himself in this MVP-esque season that he’s having and he’s having a great season,” Hill said, as seen in team-provided video. “He’s a great role model for kids to watch play the game. The way he plays the game, the right way, and as far as facing him, I was making sure that we had a good mix going. … He’s one of the best in the game, if not the best right now.”

“That’s the craft and the art of pitching that I enjoy the most,” Hill said. “With the season that he’s having right now and where he’s come from, especially with his ability to hit the breaking ball that he’s shown over the last couple of years has been tremendous. … I enjoy it from the standpoint of understanding the history of the game.”

Hill, during his time with the Chicago Cubs (2005-2008), faced Bonds — the controversial home run champ — in two games in his career. Bonds would draw two walks, an intentional pass, and record one base hit in their career matchups. Hill, now 42 years old, acknowledged a similarity in environments when facing the two on the mound.

“It takes you back a little bit as far as the appreciation that we all have for getting to this level and how much we’ve sacrificed and worked to be here and put failure on the line every single night that we step on the field,” Hill said. “The appreciation is definitely there and the excitement from the fans obviously with what is going on and the astuteness of the fans and understanding this is a huge moment in the history of the game.”

— Right fielder Alex Verdugo, who crushed a game-tying three-run blast against Gerrit Cole in the sixth inning, recorded his 500th career hit during the clutch at-bat, according to Red Sox senior manager of media relations and baseball information J.P. Long.

— Making his 24th start this season, Hill tied the lead in appearances made at age 42 or older in Red Sox history, according to Long. In 2005, former Red Sox pitcher David Wells also made 24 starts at 42 years old.

— Since hitting his 60th home run against the Pittsburgh Pirates on Sept. 21, Judge has gone 3-for-10 with four walks and four strikeouts.

— The Red Sox and Yankees meet again for the third game of their four-game set on Saturday. First pitch at Yankee Stadium is set for 1:05 p.m. ET, and you can watch the game, along with an hour of pregame coverage, live on NESN. 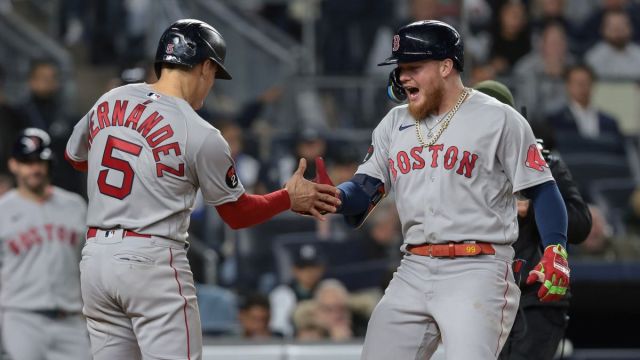