“I’m as comfortable with a video camera in my hand as I am with a hockey stick,” the Providence Bruins center says.

While some others around the P-Bruins’ dressing room are going to movies, playing video games, surfing the Internet or taking naps, Larman spends his free time preparing for life after hockey — as an aspiring filmmaker.

“I’ve always had a passion for film-making and documentaries are a type of film I enjoy producing,” Larman explains. “Ever since I was in ninth grade and able to operate a computer intelligently, I would use editing software and my parents’ home VHS camera to make videos with my buddies and put transitions in just for fun. It’s something I really enjoy, being in that creative part of my mind, and a lot of my creativity comes through visual images.”

Those images have always been driven by music. No matter the song on the radio, he’d hear the message and the mental pictures would follow. It only made sense for Larman’s first official foray into film to be guided by rhythm, rather than dialogue.

In the summer of 2008, Larman took a one-week workshop with the New York Film Academy in New York City. He went with an idea already in mind, a 10-minute creation called “We Are One.” In it, several people of different backgrounds, including Larman himself, are walking around New York, strung together through circumstance instead of verbal communication. With the help of eye contact or even physical contact, each person’s story is told. As each story changes, so does the music’s type and tone.

“The words in the music entail certain messages,” Larman notes. “The film begins with me at Ground Zero, and eventually, the path of the eyesight gets back to me there. It’s one continuous circle.

“I wanted to kind of connect people together through situations, where the viewer can come out of it thinking, ‘We are all one species here, even though we may look different, smell different or taste different. Ultimately, we all come from the same place.’ I wanted to get that point across quickly and easily in a short video to hopefully bring some inspiration.”

As for beginning and ending at Ground Zero, Larman wants his films to provide a message of significance, a lesson to be learned.

“In this world, we may be faced with difficulties, and people may push war upon us, but ultimately, we all want peace,” Larman says. “It’s nice to be able to be in a position where I can maybe affect people in a positive manner. I’m just one guy doing his job.”

Larman’s literal job, of course, is to play hockey, and the 24-year-old has had great success doing so. In five pro seasons, the defensive-minded forward has suited up for 294 games, including 26 in the National Hockey League between Florida and Boston. Still, he takes pride in not falling into the stereotypes that grab hold of so many in his line of work.

“At the end of the day, this is a job,” Larman admits. “We love doing it, and a lot of people love to do their jobs. But a lot of people have different interests in life, and I’m just following where my heart takes me. Film has always been a part of that.”

It was his own intuitive drive, he says, that first got him interested in film. The Green Mile touched him emotionally, Man on Fire struck him stylistically, and he views Braveheart as a model to follow when it comes to storytelling. Now Larman looks to the likes of James Cameron and Steven Spielberg for inspiration, as well as motivation.

“I think I have some ideas that are unique for me that I haven’t seen in films, so I’m really excited to put them together and produce something for the fans, so they can enjoy my production,” Larman says.

When the offseason comes, which he hopes is still several months away, he plans to get started on his next film. And, like his unique makeup, he is starting with a unique approach. The film’s premise is still in the works but the title is set: “Where Is Home?”

For a guy who makes his living traveling from city to city, hotel room to hotel room, Drew Larman always feels right at home with a video camera in hand. 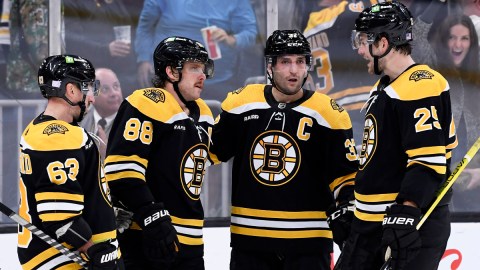