KANSAS CITY, Mo. — Josh Beckett is coming under fire for reportedly playing golf with a sore lat muscle. He did so just days before missing his turn in the rotation.

But Red Sox manager Bobby Valentine isn't ready to jump to any conclusions. Since Beckett flew back to Boston on Wednesday, Valentine snever had an opportunity to discuss the issue with his right-hander.

"I haven't talked to Josh about this yet, so it's really not — I'm not sure I can really comment on it other than to say, physical issues I guess, he had a sore lat," Valentine said. "He wasn't an injured player. I know that. We'll take it from there, but I'm sure that Josh wouldn't do anything that's going to jeopardize his team or his season. I know that."

According to the initial report, Beckett was playing a round of golf with teammate Clay Buchholz. Buchholz declined to comment on the matter before Wednesday's game against the Royals.

Beckett missed Saturday's start after the lat muscle flared up during his previous start, when he threw 126 pitches. Beckett was evidently unavailable to pitch from the bullpen in Sunday's 17-inning battle against the Orioles.

"I really wanted to pitch. I wound up making things worse," Beckett said last week. "It wasn't totally shocking when [Valentine] came in and said [I was missing a start]. It was definitely something that was discussed before that. It felt a lot better the other day. I'm pretty optimistic this next start is going to be fine."

Beckett is scheduled to make his next start Thursday against the Indians. In five games this season, Beckett has a 2-3 record with a 4.45 ERA and 24 strikeouts.

Michael Bradley Would ‘Have no Fear’ About Playing for AS Roma, Agent Says 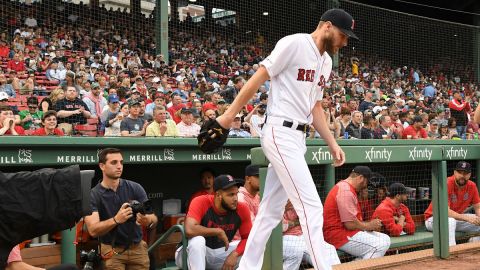