The Red Sox start interleague play on Friday against the Phillies, which means two things. One, that they’ll have their first look up close at Jonathan Papelbon in a different uniform. Two, that they’ll be without a designated hitter.

If Bobby Valentine wants to have David Ortiz‘s bat in the lineup for this weekend’s slate of games in Philadelphia, he’ll need to find a way to get Ortiz into the field.

Last year, when the Red Sox played a stretch in National League ballparks, Adrian Gonzalez ventured into the outfield to allow Ortiz to play some first base. This year, Bobby V might have to get creative not only to find a way to get Ortiz’s bat into the lineup, but also to find room for both of his third basemen.

Kevin Youkilis will be back off the disabled list sooner rather than later and Will Middlebrooks may be on the outside looking in when it comes to getting major league at-bats. Unless one of those two ends up patrolling the outfield as well.

Youk has played 22 games in the outfield throughout his career, which makes him a veteran out there compared to his other corner infield brethren. Gonzalez played two games in right last year, while Ortiz has never dared play anywhere in the field other than first base. Middlebrooks has never played in the outfield either, but considering he’s only been in the bigs for two weeks, he may just need a chance.

While the team won’t be suffering through any nine-game stretches without a DH like they did in 2011, Bobby V and Co. may decide to get a little creative over the course of the year to keep as many of the team’s big bats in the lineup as possible. Who will have to step outside their comfort zone to help the team?

Which Red Sox infielder should play the most outfield during interleague play? 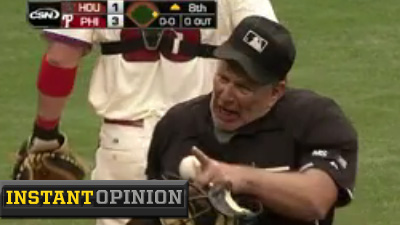 MLB Gets It Right With Suspension of Bob Davidson After Umpire Acted Like Jerk, Looked for a Fight