FOXBORO, Mass. — Coming into Sunday night’s game, the Patriots had a big advantage over the Ravens from the first time the two teams faced each other — a revamped secondary.

Unfortunately, that upgrade in the defensive backfield didn’t last long in the AFC Championship Game, as newcomer Aqib Talib got injured with just over five minutes left in the first quarter. After the injury, every set of binoculars in the Gillette Stadium press box was fixated on Talib for the rest of the game, waiting to see if he would shed his winter cap and heavy cape and emerge from the bench. He never did.

Talib went down with what the Patriots called a thigh injury, and he was questionable from the first quarter on. In the first 9 1/2 minutes of the game that he was on the field, he was making solid play after solid play, trailing receivers down the field and getting his hand in between Anquan Boldin and the football.

Talib presented an intriguing matchup for the veteran receiver. Both players are 6-foot-1 and more than 200 pounds, and both are known more for their physical play than their speed. Early in the game, Talib was winning that matchup.

But after Talib went down with the injury, Kyle Arrington was forced to move outside, and Marquice Cole had to come in to cover the slot. When Boldin was in the slot, he overmatched the fourth-string Patriots cornerback.

After Talib’s thigh injury — which he aggravated in style on a pass breakup — Boldin had five receptions for 60 yards and two touchdowns on six targets. Before Talib went down, he was targeted two times without a reception.

Bill Belichick wasn’t very talkative after the game, and just repeated that the team had to make adjustments when Talib went down when he was asked several times about the cornerback’s injury.

Arrington and Devin McCourty didn’t want to place any blame on their performance in the secondary on Talib’s injury.

“We adjust and we moved on. We know what we had to do to go on,” McCourty said. “We are always prepared for a guy that goes down, but injures always stink when they happen in the middle of a game like that.”

One of the keys to stopping the Ravens was to limit their deep passes. Before Talib went down, the Patriots did a great job of stopping Flacco and the Baltimore passing attack, even if it was a small sample. They seriously struggled in the second half, though.

“Nothing changed,” Arrington said. “We kept the same game plan, so like I said, kudos to them for making in-game adjustments and getting to that 11 personnel, hurry up offense [and] fast tempo. We just couldn’t get off the field.”

Talib made a major impact on the divisional round game of the playoffs last Sunday. He trailed Andre Johnson around the field and allowed seven receptions for 71 yards on 10 targets — not amazing numbers, but impressive nonetheless since he was facing one of the best wideouts in the league.

Safety Steve Gregory downplayed the impact of Talib’s injury like his defensive back teammates did, and he explained that it was on the rest of the secondary to step up in Talib’s absence.

“It doesn’t matter who is in there, what guy has to be able to step up and play,” Gregory said. “We need to just find a way to go out there and make plays and give ourselves a chance to win the football game. Just overall we didn’t do that today.”

As much as the Patriots want to dismiss the impact that Talib’s injury had on the game, it was among many reasons why the Patriots were knocked out by Baltimore. The injury forced Cole, who has only played 199 snaps all season, into the game. The slot corner hasn’t played since Week 16 against Jacksonville.

After Talib went down, Boldin went off and Flacco started firing bullets into the New England defense. The Patriots’ defense had to stay on the field for what seemed like forever on every possession, and the offense didn’t help much by failing to score in the third and fourth quarters.

Talib is a free agent after this season, and Belichick and the Patriots’ front office will have an important decision to make regarding the cornerback’s future this offseason. 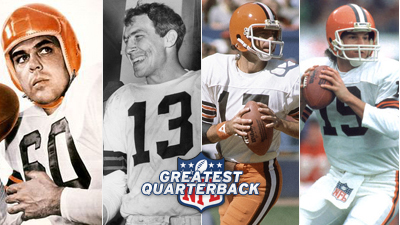 Vote: Who Is the Greatest Quarterback in Browns History?