The Red Sox didn’t skip a beat when Joel Hanrahan made a trip to the disabled list, and it’s unlikely that they’ll skip a beat while Andrew Bailey deals with his own injury issue.

Red Sox manager John Farrell called upon Hanrahan to close out the ninth inning of Thursday’s 3-1 win over the Blue Jays, which immediately raised some eyebrows. There had been no prior indications that Bailey was hurt, although it seemed logical to assume something was physically wrong with the right-hander, as he has thrived since seizing the closer’s job while Hanrahan was sidelined.

After the game, Bailey acknowledged that he’s dealing with some biceps soreness. He was quick to point out that the injury is “nothing crazy,” but he also noted that the Red Sox are taking a cautious approach. For a number of teams, losing the closer for a few games might be an issue. But for the Red Sox, it’s simply a minor setback.

It’s difficult to replace Bailey, and with any luck, he’ll only be out of action for a few days while his symptoms subside. Given the Red Sox’ bullpen depth, though, they can afford to be methodical in their handling of the current situation. A cautious approach is not only the right approach, but it should — and likely will — be Boston’s only approach. After all, Hanrahan pitching through some soreness didn’t work out so well earlier this season.

Hanrahan has admittedly endured plenty of struggles, which include giving up a run on two hits in an inning of work on Tuesday — his first outing since being activated from the disabled list. He still figures to be a big part of the back end of Boston’s bullpen, though, and shutting down a few games might help him restore any confidence he may have lost during the Red Sox’ transition to Bailey as the ninth-inning man. If that’s the case, Hanrahan is already heading in the right direction after closing out the Jays on Thursday.

Hanrahan isn’t the only key cog that makes weathering a brief absence from Bailey possible. Junichi Tazawa and Koji Uehara have been fantastic whenever called upon, and they’ve each demonstrated an ability to get big outs. Thursday was no different, as Tazawa escaped a bases-loaded jam — created mostly by Andrew Miller — in the seventh inning, and Uehara closed down the eighth inning with back-to-back strikeouts following a one-out single from Edwin Encarnacion.

The biggest factor over the next few days is handling Bailey himself. The rest of the bullpen is more than capable of picking up the slack in his absence, so the Red Sox need to ensure that Bailey heals up for the long haul, and that he remains mentally sharp during whatever down time he has while dealing with his ailment.

Bailey missed a big chunk of last season because of an injury, and he has stated repeatedly since the offseason that his main objective for 2013 is to stay healthy and prove that he’s fully capable of being the All-Star pitcher he was in Oakland. The results have been there thus far, so Bailey and the Sox must be delicate over the next few days to ensure those results will continue to be there moving forward.

Bailey’s injury is in all likelihood minor, but now’s not the time to take any chances. 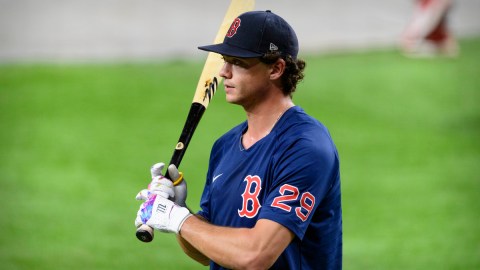