Jason Collins Throws Out First Pitch at Fenway to John Farrell, Who Says ‘We Respect His Courage’ - NESN.com Skip to content BOSTON — Shortly after former Celtics big man Jason Collins revealed that he?s gay, the Red Sox invited him to throw out the first pitch at Fenway Park. On Thursday, Collins took them up on the offer.

Collins threw out the first pitch at Fenway before Thursday?s Red Sox-Rangers game. John Farrell caught Collins? ceremonial first pitch, and the Red Sox skipper said that the invitation is a reflection of the franchise?s openness.

Collins tweeted about the opportunity earlier in the day on Thursday, asking his followers whether he should go out of the stretch or the windup when delivering his pitch. They must have responded with windup, because that?s exactly what Collins did. 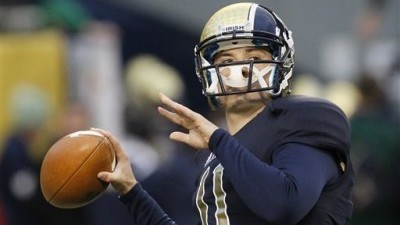 Report: Tommy Rees Will Start at Quarterback for Notre Dame Next Season