Florida is continuing the movement to erase Aaron Hernandez from football history.

The school, which already took down some photos of Hernandez around the football facility, removed a brick commemorating Hernandez’s All-American season outside Ben Hill Griffin Stadium on Thursday morning.

“We didn’t feel it was appropriate to celebrate Aaron Hernandez,” the school said in a statement. “We put together an immediate plan after the initial news broke to remove his likeness and name in various private and public areas in the facility, such as the south end zone team area, locker room, football offices, Heavener Complex Kornblau Lobby and the brick display entrance to the football facility.

“We were able to implement some of the changes immediately, and this [brick removal] was a more complex process to complete with our vendors. The plan was to have everything completed before the end of July.”

Hernandez was an All-American in 2009, his junior year, when he had 68 catches for 850 yards and five touchdowns. He caught 111 passes for 1,328 yards and 12 touchdowns throughout his college career.

Check out photos of the removal below. Report: Steve Nash, Ex-Wife Barred by Court From Saying ‘Disparaging’ Things About Each Other on Twitter 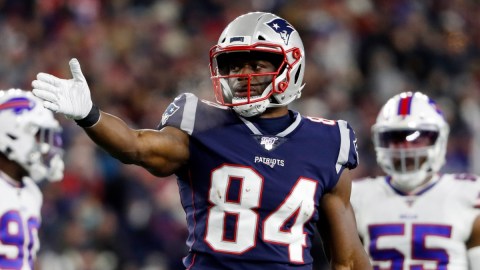