So, is this whole Magna Carta Holy Grail thing just about how awesome Jay-Z?s foray into the sports world has been?

Jay-Z has already received attention for name-checking the NFL in one song on his new album, where he said he wasn?t worried about the NFL investigating him after questions arose when Jets quarterback Geno Smith came on board with Jay-Z?s new sports repping company, Roc Nation.

Now, thanks to ESPN?s Darren Rovell listening to some rap music, it sounds like Jay-Z channeled sports for another one of his tracks. This time, he?s bragging about his biggest (and first) Roc Nation acquisition, Robinson Cano.

?Scott Boras, you over, baby,? Jay-Z is said to rap on the song ?Crown,? according to ESPN. ?Robinson Cano, you coming with me.?

That could be exactly how it all went down in April, when Cano — who is on the cusp of his big free agent payday — jumped from Boras to the just-hatched Roc Nation.

Boras, meanwhile, is taking the turf war in stride.

?I?m a fan of jazz, and my favorite musician is Bernie Williams,? Boras said, according to ESPN. ?What other musician could play center field for the Yankees and win four world championships??

Or, what other agent could drop chart-topping albums and command the sports world? Oh, right — Jay-Z. Your move, Boras.

Jarret Stoll Has Seizure, in Hospital After Suffering Concussion During Kings’ Playoff Run 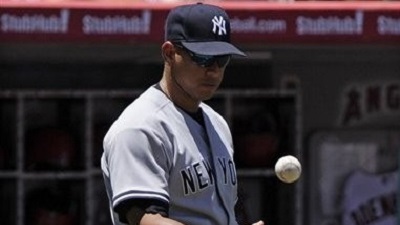