Sweden is among the world’s leaders in the fields of sustainability, governance and income. We might have to add policing soccer hooligans to its list of accomplishments.

On Thursday, police in Stockholm used a novel technique to prevent fans from rival clubs, AIK and Djurgardens IF, from brawling: they increased the speed of the escalator on which fans were riding from normal speed to “rocket speed.”

After an Allsvenskan (Swedish first division) game between the two clubs ended in a 2-2 draw, fans from both sides found themselves in a tunnel — separated only by a line of police and a few yards of space between them. Djurgardens fans were riding down the escalator while cursing at AIK fans, who were riding up another escalator. When a few Djurgardens fans with bad intentions tried to climb up the escalator, the police acted quickly and sent them tumbling on a high-speed escalator ride down a level or two. So far as we know, there was no mass brawl in a Stockholm tunnel that night.

YouTube user TheCartelxb uploaded the video, calling the ride the “Rocket-Speed Escalator.” We like it, so we’ll use it too.

See the genius of the “Rocket-Speed Escalator in the video below.” 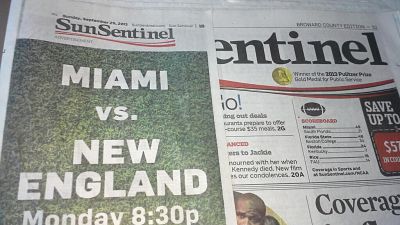