The Falcons might be on the outside of the playoff picture looking in right now, but they remain confident in their chances, which means Tony Gonzalez will likely be staying put for the time being.

Falcons head coach Mike Smith said he wouldn’t even entertain the idea of trading the future Hall of Fame tight end on Wednesday. He even called the idea of such a trade “preposterous.”

“That’s preposterous that Tony would be traded,” Smith told ESPN.com. “He’s an integral part of our offense and has been since he’s been here. And he’s having another Hall of Fame season.”

Gonzalez had a slow start to the season, but he’s caught 22 passes for almost 250 yards and a pair of scores over the past two weeks and reignited the Atlanta passing game. With the Falcons at 1-4 heading into the bye week and wide receiver Julio Jones potentially lost for the season, Gonzalez, who has repeatedly said this will be his last NFL season, might be watching his final chance at a Super Bowl title crumble before his eyes.

Smith is convinced that the Falcons can fix their problems, though, and he sees Gonzalez as a major cog in the would-be turnaround.

“We are still in this,” Smith said. “There are still 11 games to be played, a lot of football to be played. We’re focusing on us and focusing on what we have to do to get a win. We can’t look beyond our next opponent. And right now, our opponent is the Atlanta Falcons this week. And next week, we’ll start focusing on Tampa Bay.”

The Kansas City Chiefs, the team that Gonzalez spent his first 12 NFL seasons with, are currently 5-0 and would seem like a perfect fit, if the Falcons were to trade Gonzalez. Chiefs general manager John Dorsey entertained the idea of trading for Gonzalez during a recent radio interview, which is what drove the trade speculation in the first place. 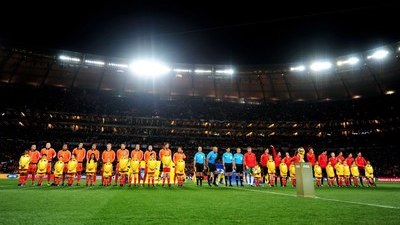