BOSTON — The Rays gave the Red Sox an inch. Boston took a mile.

The Red Sox found themselves in a 2-0 hole Friday after Sean Rodriguez and Ben Zobrist smacked a pair of solo homers off Jon Lester. A strange play in the fourth inning opened the door for the Red Sox? offense, though, and Boston kept its foot on the gas en route to a 12-2 blowout victory in Game 1 of the ALDS.

Matt Moore held the Red Sox hitless through the first three innings, but Dustin Pedroia opened the bottom of the fourth with a leadoff single into center field. What happened next was not only out of the ordinary, but also game-changing.

David Ortiz smacked a fly ball to deep right field. Wil Myers raced back toward the wall and appeared to have it sized up. Strangely, Myers backed off at the last second, and the ball bounced on the warning track and up into the Red Sox? bullpen for a ground-rule double.

?From what I was told there, he kind of saw Desmond [Jennings] coming through the corner of his eye and just backed off,? Rays manager Joe Maddon said. ?Really a routine play. It’s not like there’s any problem with communication. He just saw something and backed off. That was it.?

But that wasn?t it. The Red Sox ended up scoring five runs in that fourth inning after Myers? miscue, and Moore couldn?t make it out of the fifth inning as Boston?s offense just kept hammering away.

?I don?t know what happened, but one thing I?ve always said with my playoff experience is you play 162 games, a lot of innings, a lot of pitches, a lot of runs,? Jonny Gomes said. ?One thing you can guarantee in the playoffs is you?re going to see something you haven?t seen all year. And we saw that right away.?

While Myers? mishap was certainly unlike any specific play we?ve seen this season, the Red Sox? relentless offensive attack was right in line with what we?ve seen all year. The Red Sox sensed an opportunity, and they wasted no time in delivering the knockout blow.

Gomes — as he?s been all season — was the catalyst for Boston jumping ahead following Myers? weird defensive play. He drilled a double off the left field wall, and then hustled his tail off to score from second base as Stephen Drew beat out a close play at first base for a two-out infield single.

Will Middlebrooks made it 4-2 with a line-drive double off the Green Monster, and Shane Victorino plated Boston?s fifth run by slapping a single into right field. The Red Sox added three more runs in the fifth inning, tacked on four more in the eighth, and that was all she wrote.

?I think that just says how you see nine hitters, and we all work together,? Gomes said of the Red Sox? offensive attack. ?The inning we scored, right before me, [Mike] Napoli didn?t get it done, but I think he saw seven or eight pitches. With that being said, I don?t know if he tired out Matt or what, but from the on-deck circle, I was able to see eight pitches and it allowed me to jump on the first two. Guys that don?t drive in runs or don?t get the big hits, but I tell you what, we definitely work one through nine. We don?t sit back and wait for the three-run homer.?

The Red Sox haven?t sat back often this season. That was evident even in the team?s preparation this week, which included an intrasquad scrimmage Wednesday. Sure, there was some rust in the first three frames Friday, but once the Red Sox shook it off, there was no stopping one of the game?s most potent offenses.

David Price will take the ball for Tampa Bay in Game 2 on Saturday. If the Rays can?t cut out the one big mistake that plagued them Friday, Boston?s wagon might not decelerate any time soon. 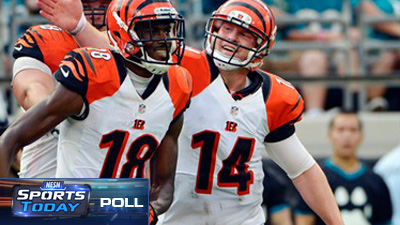 Vote: Which Bengals Player Are You Most Concerned About in Sunday’s Game? 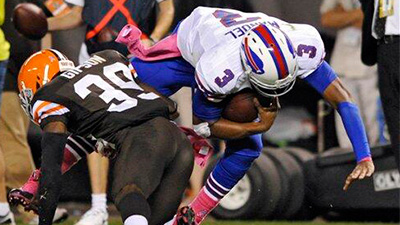