Regardless, Phish debuted a new song at a concert in Atlantic City on Halloween: a seven-minute ode to the free throw tragedy of Darius Washington, Jr., current Turkish Basketball League player and then freshman for the University of Memphis in 2005.

Washington and Memphis were playing Louisville in the Conference USA final with an NCAA berth in the balance. Washington went to the line with his team down two, three shots and no time left on the clock. He made the first one.

He missed the next two.

Louisville would eventually fall to Illinois in the Final Four, but that would be no consolation to the freshman, who immediately covered his head with his jersey after missing the final shot. Sensitive to this delicate moment, Phish frontman Trey Anastasio wrote lyrics for the song — titled “The Line” — that go a little something like: “Dry mouth, push it out, I can hear my heart pound, a hero?s what I?m not.”

So much for the vote of confidence. Anastasio would include a dedication to Washington after they finished their seventh harmonica solo, saying, “Dedicated with much love to the incredible Darius Washington, Jr., that song is about his experience when he missed those two free throws at the end of the Final Four Michigan State game. We love him, and we can relate.?

Not exactly Stump the Schwab but there probably wasn’t anybody in the crowd who noticed the gaffe.

Since 1999, if the World Series logo has featured a pennant, the Red Sox have won it.

Best play ever made in a high school gym?

Kelly Olynyk Struggles And Other Impressions From Celtics’ Loss to Grizzlies 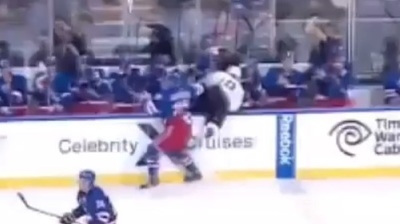