The NFL is pushing for even more caution when treating concussions, and Wes Welker seems to be precisely the kind of case where extra care is called for.

The Denver Broncos wide receiver has not played since suffering his second concussion of the season Dec. 8 against the Titans. Welker?s first concussion came Nov. 17, but he recovered in time to play the following Sunday against the Patriots. A player with a history of taking extremely rough hits, Welker has most often played through.

ESPN now reports that Welker, who missed the Broncos? last game, against the San Diego Chargers, is not expected to play for the rest of the season. While earlier reports ruled him out this week against the Texans, the ESPN report has him also sidelined for Dec. 29?s season finale against the Oakland Raiders.

While all concussions bring the worry of long-term damage, repeat concussions are considered especially dangerous. Players who are hurt before recovering from their first head hit are in danger of damage becoming permanent or possibly leading to degenerative brain diseases such as chronic traumatic encephalopathy, or CTE. The NFL has introduced strict guidelines, including tests, that players must clear before returning to practices or games in an attempt to ensure that their symptoms are gone before they take more hits.

Welker?s two concussions were several weeks apart, but the speed with which he returned to play against the Patriots might have complicated his recovery from the first one.

The Broncos might also just want Welker to rest up and be completely healthy for the playoffs. With a playoff berth sewed up and a No. 1 or 2 seed likely, Denver doesn?t have much to play for over the final few weeks. 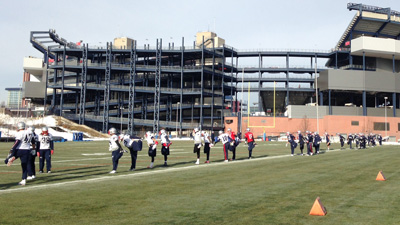 Patriots’ Defense Has Been Tested Deep Often, But Devin McCourty, Secondary Have Made Opposing Offenses Pay