The New England Patriots need to bolster their defensive line whether Vince Wilfork comes back or not.

Wilfork should return, but the Patriots defensive tackle might need to take a pay cut to make that happen. He’s on the books for an $11.6 million salary-cap hit in 2014, the last year on his contract. The Patriots are desperate for cap room this offseason.

Chances are the Patriots will attempt to restructure Wilfork’s deal in order to pay for free agents and draft picks this offseason. It might be time to start planning for life without Wilfork, though.

The Patriots drafted Richard Seymour, Ty Warren and Wilfork in the first round of the 2001, 2003 and 2004 NFL drafts, respectively. The highest the Patriots have drafted a defensive tackle since their last Super Bowl win was Ron Brace at No. 40 overall in 2009. It’s time for them to take a top-tier interior defensive lineman again.

The Patriots have plenty of depth at defensive tackle, but after Wilfork and Tommy Kelly went down with season-ending injuries, it was a struggle to get through the 2013 season. Kelly’s uncertain to return in 2014 after tearing a ligament in his knee in 2013. The Patriots also have Sealver Siliga, Chris Jones, Joe Vellano, Armond Armstead, Isaac Sopoaga, Cory Grissom and Marcus Forston returning at the position.

Ideally, the Patriots would take a defensive tackle who can get pressure on the opposing quarterback. But the Patriots also could elect to draft a replacement for Wilfork, since he’s 32 years old, coming off an Achilles tear and on the last year of a massive contract.

Let’s go through the top five defensive tackle prospects in the 2014 draft, as rated by NFLDraftScout.com.

Nix fits the bill as a Wilfork replacement. At 6-foot-2, 345 pounds, Nix has the prototypical body for an NFL nose tackle. Nix has the strength to take on double teams in the run game and bull rush centers from the nose tackle position. He also has the quickness to make plays laterally.

Patriots coach Bill Belichick can contact his good friend, Notre Dame coach Brian Kelly, about Nix. I expect the Fighting Irish to be Belichick’s new favorite team to cull players out of in the NFL draft.

Nix is coming off knee surgery after tearing his meniscus. That could lead the nose tackle to fall to the Patriots at No. 29.

Donald is a prototypical pass-rushing three-technique defensive tackle. He’s undersized at 6-foot-1, 288 pounds, but so was Cincinnati Bengals defensive tackle Geno Atkins when he was coming out of Georgia.

Donald was the talk of the Senior Bowl for his impressive practices in Mobile, Ala. He had 11 sacks and 28.5 tackles for loss as a senior at Pittsburgh, and his speed, quickness and pass-rushing ability could push the Patriots’ defense to another level.

Another Notre Dame product, Tuitt is massive at 6-foot-6, 312 pounds. He has experience at both 3-4 and 4-3 defensive end and three-technique defensive tackle. Like Donald, Tuitt’s pass-rushing ability could help transform the Patriots’ defense.

Tuitt had 12 sacks as a sophomore in 2012 and 7.5 as a junior in 2013 as he was recovering from hernia surgery. Tuitt still flashed first-round ability playing multiple positions and in different schemes. Tuitt’s size is similar to Seymour’s, though Tuitt has a thicker build coming out of college.

Jernigan spent most of his time at nose tackle, despite being undersized for the position at 6-foot-2, 300 pounds. He did a nice job staying low to take on double teams at Florida State. Jernigan is better served as a three-technique defensive tackle in the pros, where he’ll have more opportunities to get after the quarterback.

Jernigan flashed an impressive ability to move laterally with Florida State. He racked up 4.5 sacks despite playing the nose.

Hageman had eight pass deflections and an interception at the line last season for the Golden Gophers. He’s another player whose size resembles Seymour’s. Hageman had two sacks and 13 tackles for loss as a senior in 2013.

Photo via Facebook/Pitt Football From B/R 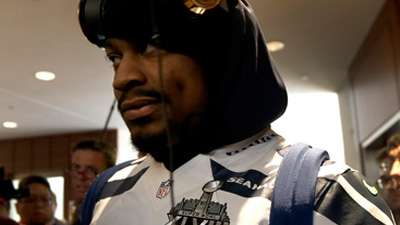